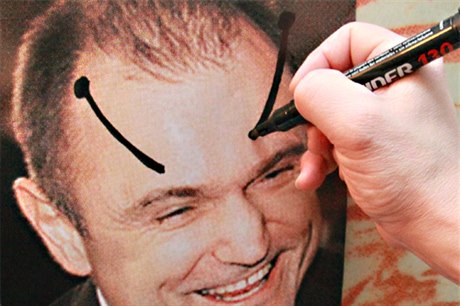 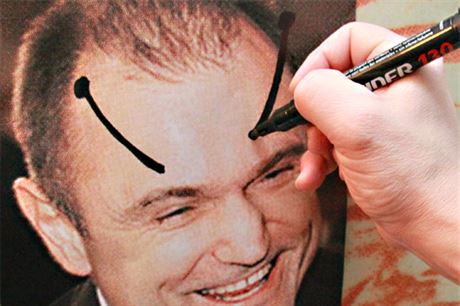 A Czech bus driver who was sentenced to a prison sentence of 100 days after refusing to fulfill a court demand he perform community service for defacing election posters and later put on the police wanted list has turned himself in.

Roman Smetana of Olomouc, who became something of a hero after the sentence created a stir for its harshness — and the fact that it was delivered by a judge who is the wife of a prominent Civic Democrat (ODS) politician and former minister of the interior, Ivan Langer — walked into a Prague police station to give himself up after around a month of avoiding prison.

The ODS party’s election posters were the main target of the bus driver’s attention during the parliamentary elections of 2010, though the faces of other party candidates were also given the same disfiguring treatment and comments. The center-right party launched proceedings against him for damages.

Smetana walked into a police station on Saturday after attending a massive union rally in the center of Prague against the center-right government headed by ODS prime minister Petr Nečas.

His presence at the rally, estimated to have been attended by between 90,000-120,000 people, was highlighted by speakers from the podium, but police did not make any attempt to seize him, the daily Lidové noviny reported on Monday.  He was later taken to Prague’s Pankrác  prison.

Smetana was initially fined Kč 15,000 and ordered to perform 100 hours of community service for disfiguring posted and writing messages such as “thieves,” “liars,” and “prostitutes” on them. He paid the fine but refused to perform the community work, which resulted in the 100-day sentence delivered by Judge Markéta Langerová .

Part of Smetana’s defense was that political posters were paid for with public money and were a means for communicating with the public and his alterations and comments amounted to his reply. He added that Langer’s wife should not have been given his case to deal with.

The initial 100-day sentence could be extended because of Smetana’s refusal to give himself up to start his sentence by the deadline of March 26.