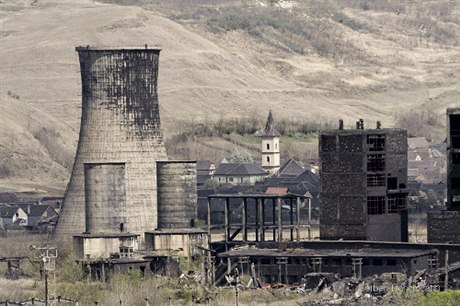 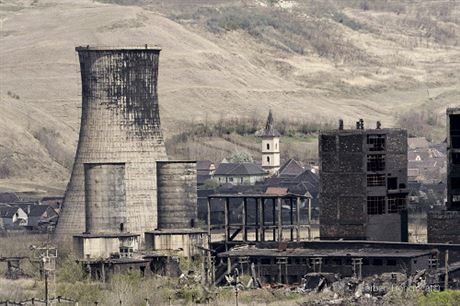 The depiction of ruins has a prominent place in the history of European art. From the Renaissance artists who sketched the crumbling remnants of Ancient Rome to the Romantic era’s painters who never missed a chance to paint an atmospheric and abandoned castle set off against a foreboding sky, artists have led the way in expanding the definition of beauty. Structures that were once considered a quarry for useful stones and marble are now vigorously protected to remain in their current state.

While the beauty of the ruins of Antiquity and the Middle Ages have been accepted beyond the slightest doubt, more recent ruins are viewed much differently. In the exhibition Crepuscular, Romanian photographer Serban Bonciocat has taken striking images of the industrial ruins of his own country and brought them to Prague, where a similar history has led to an abundance of similarly unappreciated industrial ruins.

“My pictures have, above all, a documentary intent. Their beauty is almost an unintended collateral product,” Bonciocat said at the opening of his exhibition at Prague’s Romanian Cultural Institute.

In fact, Bonciocat pointed out a difference of emphasis that arose between himself and the exhibition’s sponsor art reproduction studio ArtImaging.

“ArtImaging tried to select beautiful images for Crepuscular. Personally, I am much closer to images that are more aggressive because they reflect better the ugliness of devastation. All these sites are the outcome of a double rape: that of communism, with its traumatic and invasive approach, and on the other hand that of the phase that followed, with people who knew how to dismantle and tear apart, and thus destroy a whole world.”

Many of Bonciocat’s photos show emptied out, cavernous spaces in which the silence has a tangible presence. Through capturing slanting rays of light pouring through windows and skylights, and in one case photographing the discolored windows, the parallel with churches is carried out with a visual flair. One picture makes the comparison even more explicit, with a church spire framed exactly between a concrete reactor tower and a burnt-out factory building. Of course another interpretation of the image could be to show that the old, quaint church has withstood the blows of history while its modern challengers were defeated.

Another set of photographs are close-ups in which the industrial objects are shown too closely to allow the viewer to easily identify, resulting in images that look like abstract paintings. By honing in on industrial textures such as rust-worn metal, concrete covered with cracks, chipped paint and reflective puddles Bonciocat arrives at images that look like the collage art of abstract expressionist painter Robert Rauschenberg.

One of the most powerful close-up images is that of a single shoe abandoned for so long that it has become encased in moss, as if it were the last remaining trace of the person whose foot once occupied it. In some photographs Bonciocat combines a visually distinct object with the more abstract surface textures around it. One image from the town of Babadag (a town that might be familiar to readers of Polish writer Andrzej Stasiuk’s On the Road to Babadag) shows a concrete cylinder surrounded by a black, cracked floor that looks more like a special effect than something people once walked on. Another close-up image of a concrete wall with some indentations has the form of a face, almost as if it were a prehistoric cave painting.

Bonciocat made a point that his main purpose wasn’t to create beautiful images but to document the destruction and devastation these buildings have experienced, and by extension, the devastation of the people who used to work there. In this respect, I’m not sure the photographs achieved their goal. By excluding people from the images their stories are sidelined as well. When presented with a factory that used to employ 5,000 people that has shut its doors the only way to grasp what it means for that many people to lose their jobs with no other alternative is to bring out the human cost involved, something which these images fail to do.

Another legacy of these factories is environmental devastation, something which Czechs familiar with Northern Bohemia can certainly relate to. The small town of Copşa Mică is a textbook illustration of the ecological disaster that these factories represented. Having been the location of a factory that made carbon black dyes used in the leather industry from 1936 to 1993, the town suffered significant damage from the emissions the factory produced. Added to that was a smelter whose emissions led to an average age of death nine years earlier than the Romanian average.

On many levels the existence of these buildings are a valuable representation of history – neither entirely negative nor too positive either. “If people can see beauty and poetry in these images, it is not intended to appease our relationship with communism. I tried to picture fragments of a reality, whether they are pieces of tubes or grass invading a factory hall, or old ruined walls, ” Bonciocat said.

Bonciocat added that these ruins are rapidly disappearing just as the people who worked in them and lived near them are dying off. This emphasizes the documentary aspect of his photography. All that will be left of these ruins will be (and in some cases, already are) these photographs, images that resist the simplifications of history where something can be either good or bad without allowing for ambivalence and mixed emotions.