Coffee and a kaleidoscope of cakes 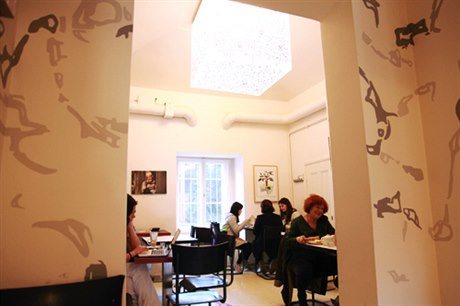 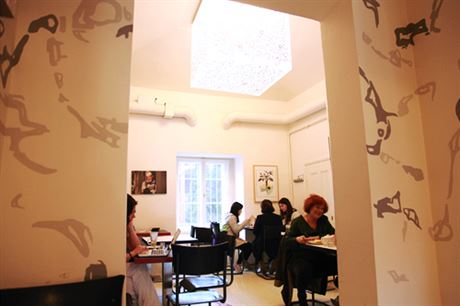 In Prague’s Náměstí Míru, one finds a café that’s been around for about a year and a half, and perfectly suited for when there’s only time for a small, quick snack. That café is called Deserterie, and serves not only desserts, but also soups and a variety of savory bites.

The atmosphere is surprisingly relaxed; rather than the kind of lunchtime rush one might expect on the average workday, this locale instead offers a background of customers sitting casually in the rear room, poring over a book or magazine or typing away on their laptops – all fuelled by an assortment of coffees and cakes.

At the front of the café is a regular patisserie counter, with many customers simply popping in for a takeaway treat. Asides from a variety of refined-looking cakes, one can also find more home-made fare, including Czech “buchty” buns and fruit tarts. Poppy, curd cheese, fruits – all varieties are available on demand. Also on offer, are chocolate treats, fruit juices and even a selection of wines. On the savory side, a variety of quiches form one of the star attractions, offered with vegetable, mushroom or meat fillings. The shortcrust pastry is properly delicate (a welcome change from the puff pastry so ubiquitous in the Czech Republic) and the fillings are tasty, the only gripe being that the portion sizes could be a little bigger –if that means paying a little extra, so be it.

During our most recent visit, we had the chance to review several exquisite pasties with meat, olives and carrots. Hearty minestrone was also on the menu, containing a generous helping of vegetables, including celery, cabbage, beans, broccoli, carrots, and cauliflower, as well as numerous pasta pieces. It represented the perfect portion to quench a hungry noon stomach (we had to add a little salt, but that is always better than griping over excess).

The soup was served with a tasty, fresh slice of wholegrain, sunflower seed-topped bread. All of the dish components tasted natural and seemingly free of chemical additives. Of particular note was that this establishment’s offerings were significantly influenced by the seasonal availability of fresh produce.  The whole affair tasted moderately fruity, crunchy; not too sweet and not too dry

With time to spare, our meal was followed by an entirely satisfying cup of cappuccino (apparently, Italians only drink this beverage at breakfast time, but that didn’t bother us in the slightest) along with an honest-looking curd cheese and poppy seed sweet tart and also a pear and marzipan cake. The latter was more of a tart too in actuality; a thin base layered with sliced pears covered by a creamy, yolky substance and on top of that a tasty crumble topping made up of crumbled nuts, including sliced almonds. The whole affair tasted moderately fruity, crunchy; not too sweet and not too dry.

It’s the quality of pastries that have brought us back to Deserterie again and again – with the aforementioned cakes finding a special place in these reviewers’ hearts. The constant changing of the café’s offerings ensure that each time, there’s something on display that we haven’t yet had the chance to sample; often, this additional sampling takes place via a take-home container.

In addition to the quality food, the service remains universally polite and eager, both behind the counter as well as the waiting staff, who happily bring your order to the tables at the rear of the café.

By afternoon, some of the last remaining desserts can look a little on the stale side, with replacements not forthcoming until the following day

So, were there any negative points? A few:

There’s also the fact the Deserterie is closed on weekends (though the staff, who surely deserve some time off, had our sympathies on this point). One contentious, and perhaps subjective, issue relates to the décor, which comes across as more curiously faux than anything else. Red-white painted floors and rather unsuccessful - and frequently changed - multicoloured paintings and graphical works on the walls. As a whole, the café engenders a very inviting atmosphere and even has an interesting original old-style door. But why not simplify this design just a little? One additional plus point: when it’s cold outside, the place is always comfortably snug.

The aforementioned culinary assortment cost us 244 crowns, which is an entirely acceptable price for the quality and quantity of what we consumed.

Because one can’t possibly try all the cakes on offer in a single visit, it wasn’t long before we undertook another supplemental trip in order to sample and review yet more desserts.   On this occasion – and without the need for much if any prodding – we tried the following:

These four choices set us back a total of 110 crowns.