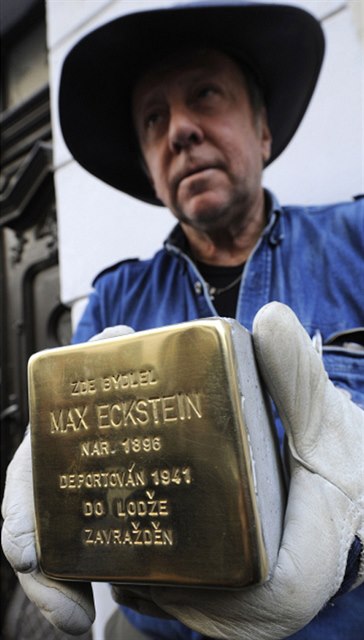 Seen here installing the first Czech ‘stumbling blocks’ in 2008, German artist Gunter Demnig is back in Prague this week to carry on his ‘life’s work’ foto: © ČTK, Česká pozice 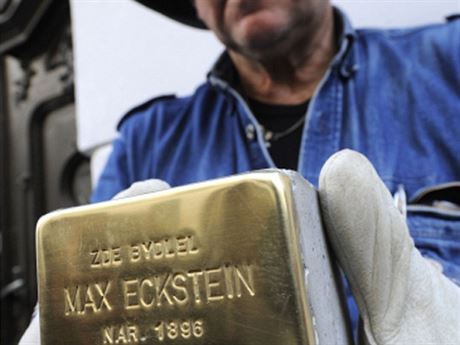 Another series of memorials, writ small, will soon grace the streets of Prague outside the homes of the Holocaust victims who lived there before being forcibly deported. It is part of the Stolpersteine (“stumbling blocks”) project of German artist Gunter Demnig, who since 1993 has installed tens of thousands of brass-plated plaques across Europe, inspired by a line from the Talmud: “One is not truly dead until one’s name is forgotten.”

Demnig’s “stumbling blocks” — cobblestones about 10 centimeters wide — serve to let the casual passerby know that in the very house that he or she is walking past once lived people who were rounded up and taken away to be murdered because of their ethnicity, religion, politics or sexual persuasion. “This is my life’s work; I will continue for as long as I’m able,” he says in an article posted on the project’s website. “Giving names back to the dead is a way of keeping them alive.”

Demnig has placed more than 27,000 stumbling stones in about 600 cities, towns, and villages throughout Germany and Europe. Each one begins with the words “Here lived...” and gives the date of the victims’ deportation and, if known, the place where they met their untimely ends. Although each one is small, over the past 15 years the plaques have collectively become the single biggest Holocaust memorial in Germany.

“The stumbling blocks become reminders and voices; they call out, ‘Every human being has a name,’” Miriam Gillis-Carlebach told the German Herald. She is the daughter of Hamburg’s last rabbi and commissioned stones from the Cologne-based artist for her family members who were deported by the Nazis.

In the Czech Republic, the first stolperstein was installed in 2008 on Jáchymová Street in Prague’s old Jewish quarter. Demnig is in town this week to begin a second round, beginning at Zborovská Street. In total, 81 will be put in place in the Czech capital. There are plans to install more in Teplice, Brno and Olomouc in addition to those in Kolín, Neratovice, Třeboň and Ostrava.

Demnig, who was born in Berlin, has always provoked public interest as a political artist. In 1990, he marked in chalk the route taken by Cologne’s Romany (“Gypsy”) community when they were deported in 1940. When he retraced the signs three years later, the reaction of an older woman gave him the idea for the stumbling stone project. “There were no Gypsies in our neighborhood,” Demnig says the woman told him. “She just didn’t know that they had been her neighbors, and I wanted to change that.”

“I designed the stumble stones to bring back the names of Holocaust victims to where they had lived; in my opinion, existing memorials have failed to do that,” he said, noting that home owners often refuse to have memorial plaques installed on their buildings, but the sidewalks are public property. “Once a year, some official lays a wreath, but the average citizen can avoid the site very easily.”