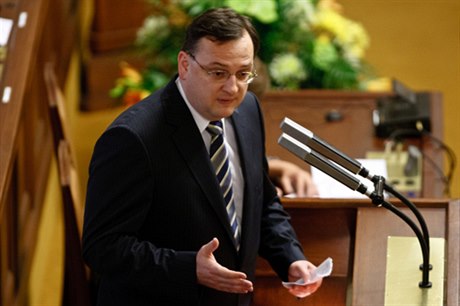 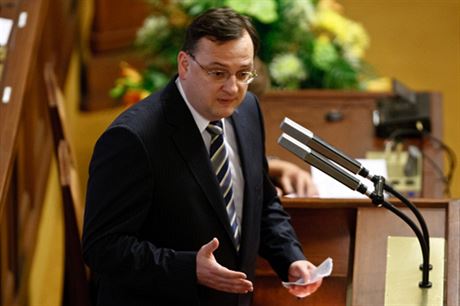 The latest meeting of the Czech government was in one sense the most productive in terms of output from the center-right coalition government so far.

Agreement was reached on a proposed new Civil Code being backed by Civic Democrat (ODS) Justice Minister Jiří Pospíšil, a bill on public tenders authored by Public Affairs (VV) Minister for Regional Development Kamil Jankovský, White Paper on army reform from Defense Minister Alexandr Vondra (ODS) and a first raft of social reform measures from the Ministry of Labor and Social Affairs headed by TOP 09’s Jaromír Drábek, about which Public Affairs originally had some misgivings. Vondra let slip that: “When it comes to basic issues of national interest, agreement is possible.”

In the case of Vondra’s own offering, the White Paper on army reform, it’s questionable whether it’is really of such fundamental national interest. In the meantime, though, the Cabinet shake-up promised by Prime Minister Petr Nečas (ODS) in order to close the chapter on the most recent government crisis is nowhere to be seen, in spite of the demands of the junior coalition party, Public Affairs.

The crisis and its aftermath have now left VV with just two Cabinet seats instead of the original four, and they would like to see Nečas deliver on more changes — in particular the sacking of Vondra, Agriculture Minister Ivan Fuksa (ODS) and Finance Minister Miroslav Kalousek (TOP 09).

A competent, stable and trustworthy government that could bring some benefits to the public might also be welcomed by most Czechs and be regarded as a matter of national interest as well.

But Wednesday’s gathering of coalition party leaders (the so-called K9) dealt with general matters rather than personnel issues. The latter will be pushed under the carpet until the beginning of June, when it will be clear who VV’s party leader is and whether the party is sticking by its demands that the two ODS and one TOP 09 ministers are sacked. It should also be clear by then if VV is sticking to its April threat to quit the government and take the votes of its 21 lower house of Parliament deputies into opposition. Refuge could be offered in ABL, the security firm founded by de facto VV leader Vít Bárta — but only if Bárta is determined to end his political career.

Nečas and TOP 09 can be expected to do what they can to accommodate VV’s demands. For Public Affairs, going into opposition would mean giving up its two remaining ministries and the support they give to its hierarchy in a party that otherwise has not real structure where they could take refuge. Refuge could be offered in ABL, the security firm founded by de facto VV leader Vít Bárta — but only if Bárta is determined to end his political career.

On the other hand, opposition would allow VV to recover its credentials as a protest party, which has clearly been lost in government. That has been one of the root causes of the party’s dramatic collapse in voter support. According to May polls by the STEM and CVVM agencies, VV’s support now stands at around 3.0 percent, below the 5.0 percent threshold needed to get into the lower house of parliament.

A VV-free government would be a minority government dependent on the good will of the opposition parties. Any hopes that the government could push through tax, health and pension reforms would be thrown out of the window. As a result of personal animosities as well as profound program differences, there is no alternative to VV in the form of a deal with the main left-of-center opposition, the Social Democrats (ČSSD). An over-arching ‘grand coalition’ appears out of the question.

If Nečas and TOP09 cannot keep VV happy and on board, then early elections, in which the right would probably be pummeled, are the only option. Such a stark option begs the question whether a patched up three-way coalition can now deliver anything worthwhile.

The answer to that is not too optimistic. According to the STEM survey, just 28 percent of respondents said they trust the PM and an even lower 18 percent have confidence in the government. That is a dramatic fall in support of 14 percentage points in both instances compared with a similar survey carried out in December.

Against the background of two bruising scandals and the near open warfare between the coalition parties, such a result is hardly surprising. Only the pledge to deliver on awaited reforms, which for most citizens will only bring pain with no immediate benefits, seems to be holding the government together. It would appear on these grounds that this government is already as discredited as was the center-right coalition of ODS Prime Minister Mirek Topolánek.

But voters even seem to be dubious about the delivery of reforms. According to a STEM poll, only 51 percent of citizens believe that Nečas’ government will push through fundamental reforms that will benefit the country. It would appear on these grounds that this government is already as discredited as was the center-right coalition of ODS Prime Minister Mirek Topolánek and is well on the way to discrediting the political right as a whole. In this case, the natural swing of things is that the Left will take over, which is the likely scenario in this country.

The Social Democrats (ČSSD) are still, however, only talking about its program of alternative reforms, which have still to be decided and presented. If its program and government line-up is not properly prepared in advance, then they too will be discredited along with whatever reforms they hit upon.

All in all, there doesn’t appear to be any easy answers for the current coalition government. During the recent scandals, President Václav Klaus has tied to steer it away from collapse, but his popularity has sunk to a record low of 47 percent. The ČSSD bluster and obstruct but do not offer an alternative and real hope. Citizens are thus left with little choice in elections, if they decide to vote at all.

At the moment Czechs have shunned extremist movements based on attacks on the European Union, and neo-Fascist groups do not have any firm foundations, wide support or attractive leaders. Without a new and more cultivated Miroslav Sládek (the leader of the Republican Party, which gained seats in the Czechoslovak and Czech parliaments in the early 1990s, and unsuccessful presidential candidate) acceptable to the middle classes, support for such movements is unlikely to prosper in spite of the disgust and disappointment of most of the population in today’s political scene.