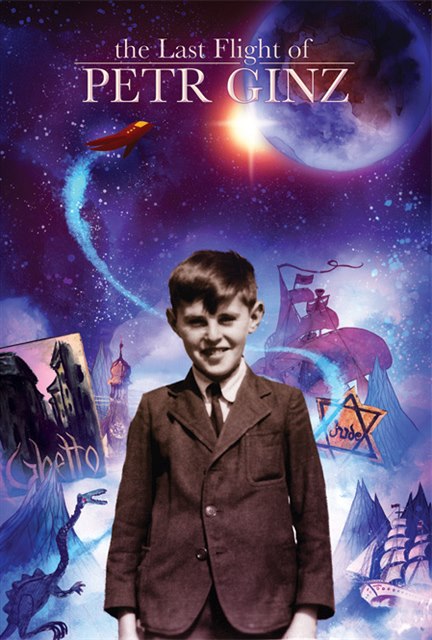 When people think of young victims of the Holocaust it is invariably Anne Frank who comes to mind. The soon to be released documentary “The Last Flight of Petr Ginz” provides a vivid glimpse of another tragically shortened life. Born in Prague, Petr was sent to Terezín and later Auschwitz, but managed to leave behind five novels, over 170 drawings and paintings, a diary and a camp magazine.

The film begins with an astronaut, who seems like he could be a character plucked out of the active imagination of the film’s protagonist. Yet this is real life, and the astronaut, Colonel Ilan Ramon — the first Israeli to go into space — had asked the Yad Vashem Holocaust memorial for something from the Holocaust to bring with him on this historic occasion.

They chose a drawing called “Moon Landscape” by Petr, showing the earth as seen from the mountainous landscape of the moon. The gesture of remembrance toward the boy’s tragic fate had unintended consequences when the Space Shuttle Columbia exploded on re-entry, killing Ramon and the six other crew members. The publicity surrounding the tragic accident — and mention of the drawing — led to the discovery of the boy’s diary, as well as some additional artwork and short stories, in a Prague attic.

It is understandably difficult to make a documentary about a teenage boy who was murdered by the Nazis almost 70 years ago. It is perhaps even more difficult to provide fresh light on a subject that has been covered as extensively as the Holocaust has been, where every frame of archival footage has been used at one time or another. But Petr was no ordinary boy, and this film is able to take the extraordinary art work, novels and observations he put down in his diaries and make out of them a truly extraordinary film.

Co-directors Sandy Dickson and Churchill Roberts give the film a voice in the present through the words of Petr’s sister Chava Pressburger (born Eva Ginzová), who, because she was younger than Petr, arrived at Terezín later and thus avoided being sent to Auschwitz. While Petr’s diary forms a significant factor before his arrival in the camp, it is Eva’s diary, which she kept throughout her interment, that helps document that period — including the heartbreaking moment when she sees her brother for the last time.

It is Petr’s own words, pictures and stories that most vividly bring the film to life. The filmmakers deftly intertwine his accounts of everyday events with his Jules Verne-influenced illustrations, showing the rise of a remarkably mature imagination under horrific circumstances. The animation of Petr’s drawings, showing rockets flying through space and adding movement to the action of his novels is particularly compelling and expertly done.

Petr passed off his novel “The Guest from Prehistory” as a lost work of Jules Verne that he had translated into Czech and illustrated himself. In fact, it was entirely his creation, and as the film makes clear, the monster of that story was an allegory of Hitler’s Nazism. The dinosaur-like beast threatening the world and perplexing the civilized minds of Europe turns out to be the mechanized creation of a mad scientist bent on global domination.

And as his 14th birthday approached (the date when Jewish children from “mixed marriages” such as the Ginz’s were to be deported) Petr’s diary shows an exceptional stoicism, virtually until the very end, when his shaky handwriting reveals the fear he can no longer fully conceal.

There were butterflies at Terezín

The heroism that was well beyond his or any age remained unabated once he was confined in the Terezín concentration camp. The film shows his art work bursting out in a display of color, countering our documentary-footage inspired perception, as a curator from Yad Vashem comments in the film, that the inmates lived in a bleak world of black and white without the intrusion of nature.

Besides his paintings of nature, the camp, and of his fondly remembered Prague, Petr undertook an even more ambitious and risky project for a then 14-year-old boy — the editorship of a magazine produced by boys in Home 1 of Children’s House L417 called Vedem (“We lead” or “In the Lead”). The handwritten magazine was composed of illustrations, stories, poems, essays and jokes, and was produced from July 1942 to September 1944, ceasing only when the majority of its creators were sent to Auschwitz and murdered in the gas chambers.

Petr was transported to Auschwitz on Sept. 28, 1944 and murdered shortly afterward. They were among the final 11 transports from Terezín to Auschwitz as the Germans began their retreat. Eva was reunited with her father in Terezín in February 1945 and the pair were liberated in May of that year, all the while holding out hope that Petr would return to them in Prague.

The documentary will receive its official premiere in 2012. So far there have been a few select special screenings of “The Last Flight of Petr Ginz” in New York, Israel and Prague.

The film will also be included in the United Nations’ 2012 International Day of Commemoration of the Holocaust in its focus on “Children and the Holocaust.” The UN Holocaust Outreach Programme is producing a 32-page study guide available online for students 13-years old and up to accompany viewing of the film, along with a series of other events and exhibitions showing the plight of children during the Holocaust.

The Czech premiere of the film will take place in March 2012 and the film is scheduled to appear in various international film festivals throughout the year. The overall project of bringing Petr Ginz's story to light is being run by the Prague-based NGO Opona (The Curtain) on whose website upcoming information about the project will be made available throughout the coming year.