A friendly owner, bizarre décor, luxury cakes and crazy salads: a café as a theater of contrasts 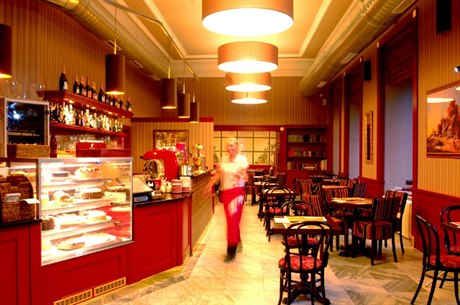 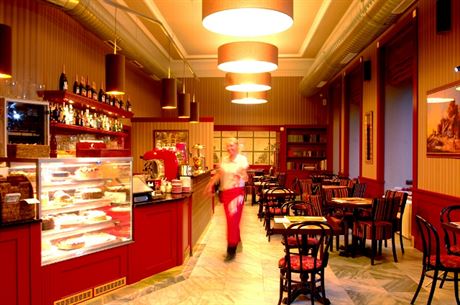 Have you noticed Café Colore, the new coffee shop and restaurant on the corner of Palackého and Jungmannova streets in Prague city center that has been doing business for three months now? The former bank space has been transformed into a fancy interior, predominantly in tones of red, divided into smoking and nonsmoking sections. Perhaps few guests pay much attention to the restaurant’s décor, but we had the opportunity to inspect it thoroughly. After all, what else is there to do when waiting for your meal to be served?

The smoking section evidently seeks to create the impression of an orderly and sedate place, but the raging red color somewhat spoils the effect. It is ubiquitous: on the doors, the wood paneling, the chairs and — in accord with Julis Meinl’s flagship color — even on the staff aprons. Completing the impression of a living room was certainly the objective of placing a bookcase in the corner, but to us at least it looked more like an unconvincing mock-up.

There are hang-outs where the guests leisurely and naturally browse books while sipping their coffee: Café Colore is not one of them. Perhaps this is because it lacks the kind of completely relaxed atmosphere agreeable to oddballs and bookworms. The hanging of pictures parodying classical masterpieces — evidently intended as a mischievous and self-mocking gesture in the respectable living-room environment — was a total failure.

The smoking section, initially harmlessly smokeless, filled at noon with a thick, unbreathable fog, in which a few workaholics bent over their laptops and a few young people intrepidly lounged about. They must have instinctively headed for this place after they had caught sight of the prints of several works by the London street-art wizard Banksy on the walls.

We hurried through here to the toilet, and just a cursory stay in the smoking room is more than enough. Moreover, when it comes to atmosphere, the space is reminiscent of a railway station buffet. Hence, we hurried back to the living room. At least you can breathe there.

Our table was filled with papers informing us of a number of dining variants, from the weekly menu through the more expensive seasonal menu to the fixed menu. We earned the considerate attention of the café owner himself, who readily explained the ingredients of the dishes and also initiated us in the history of the business.

We started with the soups: the Krkonoše from the weekly menu, and the Advent pumpkin. All the meals from the weekly menu seem to be for the calorie-conscious  — the Krkonoše soup, for example, served in a small white cup, consists of approximately five spoonfuls of a sort of slightly blended potato soup with whole or sliced mushrooms. It had a very good taste, not destroyed by any overly bold flavorings, but perhaps they could have gone easier on the pepper.

The pumpkin soup, on the other hand, served in a large bowl, satisfied us not only as regards the quantity. Besides the core ingredients, it had bits of dried apricot, plums and, here and there, apple. Floating on the top are sliced almonds and parsley. Thanks to the cream, it has a wonderfully smooth consistency. We can safely say that the soup is one of the best variations on the pumpkin theme we have ever eaten in Prague; ideal for one of those cold winter’s days.

The first of the main courses — the salmon fillet — was again selected from the weekly menu. The salmon, or rather baby salmon, is a curious matter: On the plate it looks like it has been heated up in the microwave. The plate itself, however, is not hot. From one end it tastes “normal,” from the other a touch smoked. On all accounts, it is definitely not an entirely fresh specimen; the owner himself revealed to us that their fish is more often than not “fresh frozen.” We would first and foremost expect a high-quality dressing from the cook — what, after all, had we paid Kč 150 crowns for?

The salmon fillet was ringed by several grilled mashed-potato balls (grilled at least, not fried), as well as a puddle of sticky yellow sauce with a pleasant lemon-peel tang, with tiny shrimp floating in it. Basically, everything went well together, even the hint of dill, yet we can imagine a more refined variation. What, after all, had we paid Kč 150 crowns for?

The other main course — the Café Colore house salad — had a pleasant color, but that’s perhaps all it has going for it. What was the logic through which the creator attained the final outcome? The salad is a mixture of bitter radicchio, baby tomatoes, black and green olives (the cheap, flavorless supermarket variety), walnuts and chopped lettuce — insufficiently dried and perhaps only flavored with a single drop of balsamic vinegar. And all this piled up on thin slices of beets without any support of oil.

Although we found some on the table, we would first and foremost expect a high-quality dressing from the cook — again what, after all, had we paid Kč 150 crowns for? Its main impressions are sogginess and, unfortunately, bitterness. It’s a pity, since beets could be a truly splendid ingredient for a seasonal salad. The selected Mediterranean/winter fusion, however, was really wide of the mark.

Nevertheless, no fault can be found with the cakes. After our long and loving inspection of the display case, we finally chose a marzipan cake and an English carrot cake. The first, generously sized, slice consisted of several layers of a fabulous chocolate sponge biscuit interleaved with forest fruit and rich cream, and the whole was crowned with a thick layer of marzipan.

The carrot cake too had an excellent airy texture, containing in addition to the obligatory grated carrot also a handsome amount of ground nuts and raisins. On top and inside we discovered a copious layer of a white cream, which, owing to the creamy cheese, tasted slightly acidulated. In comparison with the original English variety, it was hardly sweetened, a great variation.

Those of our readers who have had experience with British cakes or chocolate, must have noticed that compared to ours they are much sweeter: Evil tongues claim that a generous dose of sugar is there to conceal that any other taste is simply absent. The side of the cake was adorned with cracked walnuts. We rinsed the described delicacies down with a decent cup of Meinl coffee, which was served with a glass of water and warmed up milk.

Were it not for the slightly peculiar ambience, we would probably write: “You must definitely visit the café to have a cake and coffee.” Colore is also frequented by a wide mix of people, here and there some “known faces” as well as elderly ladies who had obviously come to the center to shop. The friendly owner personally welcomes his guests of various categories at the door with equal cordiality.

Message for the guests

Go for the excellent cakes and a decent cup of coffee just a few steps from Wenceslas Square. Café Colore can also be an alternative for both personal and working breakfasts.

Message for the café manager

Apart from the sweets, the cook’s culinary performances are rather unbalanced. And the wait staff is sometimes — to put it diplomatically — a touch scatter-brained.