With Chantal Poullain as its benefactress, Café Amandine has become popular but still lacks that certain je ne sais quoi. 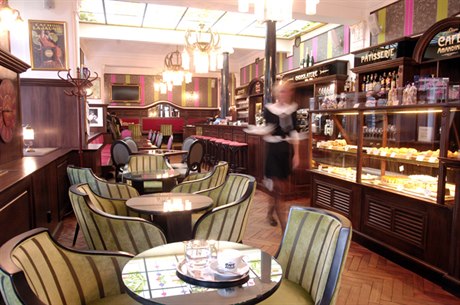 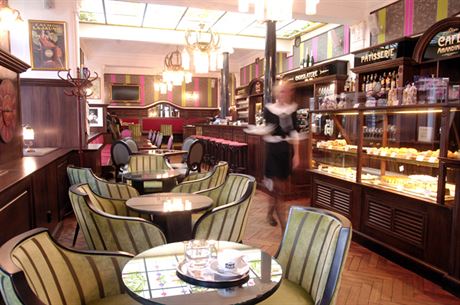 Sometimes it really doesn’t pay to be inquisitive, as in the case of the new French-style venue, Café Amandine. From outside, and on the web, it looks quite tempting and one’s enthusiasm does not diminish upon inspection of the display case with cakes and the morning’s pastries (packed with croissants, pains au chocolat, pinwheels and muffins). In addition there are various jams and, curiously, even sardines from French brand Connétable on the menu.

The owners have created an interior that goes all the way to support the classical cliché of everything French in the visitor’s consciousness; the walls have reproductions of period advertisements and Toulouse-Lautrec paintings. The furniture comprises red upholstered benches and tightly packed square tables, the bar supports two black columns with white caps and Viennese Art Nouveau lamps hang from the ceiling. It is a wonder that Edith Piaf isn’t singing with an accordion in the background.

In addition, modern wallpaper in fluorescent colors frames it all, in stark contrast to the bright red of the upholstery. We sit on the rear podium by the mock stained glass leading directly to the kitchen where they flambé and gratin unceasingly.

We first ordered kir, where instead of the advertised 20 cl the waitress brought us a half measure, she then “corrected” her oversight with a huge goblet of utterly warm wine. We then warily ordered pumpkin soup from the daily offer and a classic French onion soup from the menu. Let’s see their true colors!

Apart from the usual café sandwiches (with Arabian hummus and tuna, Carpaccio from duck foie gras and so on), baguettes (with roast beef, tuna or turkey…), quiches (Provençal, Scandinavian), pancakes and salads, the menu also includes soups, pasta dishes (spaghetti) and house specialties, often under the name of the establishment’s patron, actress Chantal Poullain.

Those with money to spare or a charitable nature can buy the Metamorphoses 2011 calendar in the café, safe in the knowledge that part of the proceeds goes to the Archa Chantal foundation, which helps to repair and renovate children’s hospitals.

The onion soup, for an exorbitant Kč 115, was a very decent variation of this famous French winter soup; it contained small pieces of onion, there was just the right amount of fat and wine too with a strong odor of thyme that was not from stock cubes. Three slices of toasted baguette with cheese decorated the surface. Served in a porcelain bowl, it retained its heat until the end.

The creamy pumpkin soup stood out with its surprisingly light yolky color making it look more like a hollandaise sauce. Nor was the taste particularly distinctive, the chef had evidently used less pumpkin and more potatoes, on top of that it was hardly salted at all. After adding salt and mixing in the top layer, which was made of a couple drops of a pistou based on basil, garlic and olive oil, the sensation was greatly improved reaching a decent caliber.

So as not to stick with the soups, we ordered, in the interests of a test, the ratatouille a la Chantal and the chicken, also a la Chantal, with mascarpone and a creamy estragon sauce. The first usually consists of a mix of Mediterranean vegetables — eggplant, zucchini, tomato, pepper — and garlic, but to our chagrin it was brought in a porcelain bowl and again covered with a crust of baked cheese. Perhaps a mistake and they were serving us the onion soup again?

Upon closer inspection, the bowl did reveal parts of the pertinent vegetables, though so overcooked as to be unidentifiable. The unappetizing pap literally floated in a bath of oil, and to add to the fat there was the thick layer of cheese. It is no wonder that a good half of these peculiar creations made their way back to the kitchen.

For a change, the chicken was a bit dry, while the sauce, which otherwise had a pleasant taste of estragon, contained a woeful amount of fat; mixing mascarpone with cream can only be considered as a murderous idea. The side order of mashed potatoes with onion also wasn’t particularly low calorie (we didn’t want the baguettes as advertised, as we were making room for the cakes, which have flour galore). The overall impression was one of absurd greasiness and dryness, not at all elating. We doubt that these dishes would please the establishment’s patroness.

To give a rounded impression and, above all, in the hope of improving it, we chose two representatives from the aesthetically perfect cake display. A pecan tart and a typical example of French cuisine — an apple Tarte Tatin, which is made “bottom up”, i.e. with caramelized apples on the bottom and pastry on top, which is inverted after baking. Unfortunately, there was no happy end to the feast.

At first sight the pecan pie looked a bit dry, but you can imagine our consternation upon finding out that the fork couldn’t penetrate its surface on the first attempt! It was necessary to fight an unequal battle for each mouthful, which, in the end, we gave up. The cake should have come with a chisel. There is little point in talking about the taste; the morsel was so dry that, in the words of my grandmother, it literally made my mouth dusty. And the waitress assured us that the pastry cook baked everything daily.

At least the female members of the staff smiled pleasantly, even though they seemed somewhat dim witted. The waiter’s behavior bordered on arrogance; clearly he felt serving guests was beneath him, and we can recommend a change in profession.

So what of the famous Tarte Tatin? Unfortunately, its decorous appearance masked the incomprehensibly hard pieces of apple with absolutely no taste. In no way could it be stated that it was al dente. They were glued together with an elastic gel that had little resemblance to caramelized sugar. It was topped by a dollop of very sweet vanilla ice cream that could easily have been left out, and – the horror of it – a heap of spray cream, while the Vienna coffee that was ordered with it had real whipped cream.

To mischievously quote the establishment’s Web pages: “To experience the unique atmosphere of Paris, enjoy freshly roasted coffee, crisp bread just pulled from the oven and enjoy the renowned specialties, just one – visit the Café Amandine.” (sic) The establishment clearly doesn’t lack ambition and self-confidence. If it aspires to the level of the Savoy, Imperial or at least the Louvre, then décor and marketing is not enough. It is necessary to focus on quality, freshness and get to work looking for a good chef and pastry cook. Amandine evidently underestimated this aspect.

A word for guests

If you limit yourself to the soup, coffee and the homemade biscuits, which are virtually impossible to get wrong, you have a chance of leaving with a good impression. We took it a bit further and we have resolved that our visit, which left us Kč 930 lighter, will not be repeated in the foreseeable future.

A word for the café

If you admit your mistakes and get to work looking for a better chef and pastry cook, then we’re happy to come along. The establishment’s congenial central location is reason enough.