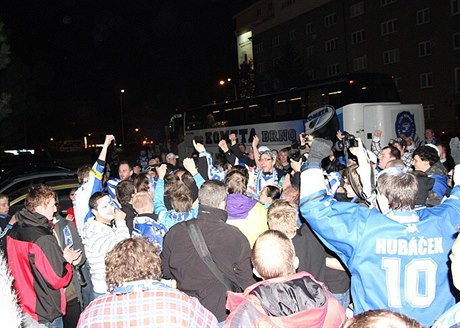 Kometa fans waited until the early hours to greet their team on their return from the semifinal winning game in Plzeň foto: HC Kometa Brno , Česká pozice 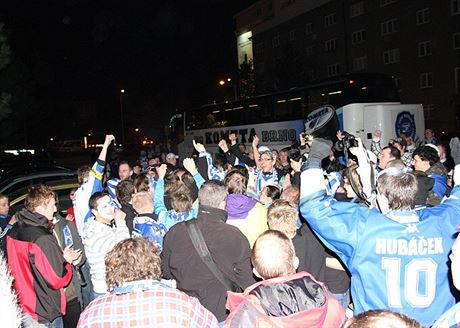 Kometa Brno caused a major upset by reaching the finals. Having placed eight in the regular season, the club from the Czech Republic’s second city played a preliminary series with Kladno, and then against the odds beat Sparta Prague, the winner of the regular season, in the quarter final before beating Plzeň convincingly in the semi-final series.

Brno last won a national championship in the 1970-71 season as TJ ZKL Brno. In the 1991 -1992, the last season of the Czechoslovak league after which separate Czech and Slovak leagues were formed, Kometa came last and dropped to the new Czech first division, the new top flight in the Czech league being the Extraliga. Kometa won promotion to the Extraliga in the 1994-95 season, only to fall straight back down after finishing last. The club then returned to the top flight for the 2009 – 2010 season after buying a license from bankrupt Znojmo.

Kometa’s remarkable journey to this year’s finals has triggered hockey euphoria in Brno, with fans camping out through the night in order to buy tickets for the sell-out semi-final games. Brno’s home ice, the Kajot Arena, has a capacity for 7,200, but the club’s management says demand for tickets is such that for the final games they could fill an arena with up to five times that capacity.

In the 1950s and 1960s Brno were the dominant force in Czechoslovak club ice hockey, winning the national title 11 times. Only Dukla Jihlava, now in the Czech first division, has won more titles with 12 play-off final victories.

Pardubice, where legendary Czech goal tender Dominik Hašek rose through the youth ranks and began playing as a professional, has five Czechoslovak and Czech titles to its name, the most recent being in 2009 – 2010, when Hašek returned to his home club for one season after leasing the NHL. Pardubice finished in third spot in the regular season this year.

The best of seven games final series gets under way on Monday April 9, at the ČEZ Arena in Pardubice.