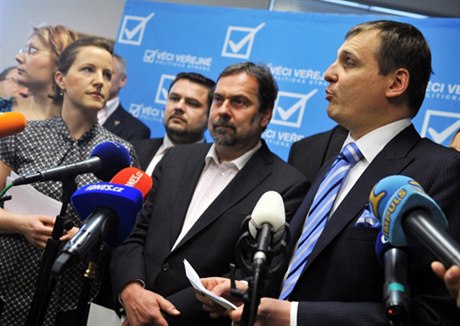 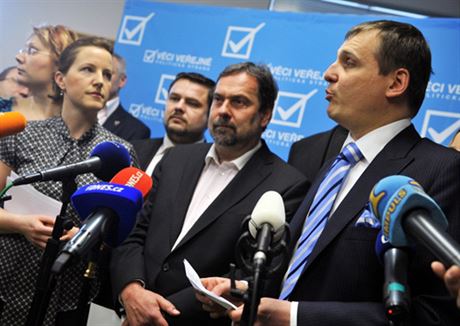 Vít Bárta (Public Affairs, VV) resigned as transport minister on Friday afternoon, saying that he didn’t want the accusations of corruption against him to damage his party or the functioning of the ruling coalition. Prime Minister Petr Nečas (Civic Democrats, ODS) promptly accepted Bárta’s resignation and called upon President Václav Klaus to follow suit; nevertheless, Bárta still intends to run for the post of VV chairman in May.

Two MPs recently expelled from the party, Kristýna Kočí and Jaroslav Škárka, filed criminal complaints with the public prosecutor on Wednesday, alleging they received cash payments from Bárta in return for their loyalty and for keeping quiet about the VV’s financing. Bárta claims the cash payments were personal loans.

To compound his woes, the sever iDnes.cz late has posted documental evidence indicating that that Bárta went into politics with the principal aim of gaining political influence in order to further the economic interests of his security company ABL. The materials also contain more evidence that ABL conducted surveillance of influential people including ODS politicians.

In recorded comments, Bárta tells his managers that surveillance needs to be conducted to win new clients. “I can imagine very well that when we have a really big and interesting client — here is an extreme example — we put someone onto them for two or three days so we can find where he is, what they’re doing, who they’re meeting. And then we try to properly infiltrate into his environment,” Bárta is heard telling his top managers in May 2007, adding that girls are extremely useful for these purposes.

Then at a meeting in October 2008 — according to iDnes.cz at the Chateau Mcely hotel near Prague — Bárta told his managers of his five-year plan to gain political influence and methods to be used. “We have to admit that we as top management behave the same as the elites that came before and at the very least we don’t support the societal system – for example we do the maximum to minimize the tax burden, we corrupt and support protectionism,” Bárta said.

After announcing his acceptance of Bárta’s resignation, Nečas said he plans to reshuffle the cabinet of ministers on the Bárta will undoubtedly continue to push ahead with his plan, with him at the forefront or behind the scenesgrounds that the scandal involving Bárta raises legitimate questions as to whether VV is fit to run the Ministry of Interior — VV chairman Radek John is the interior minister — given the party’s close ties with security firm ABL. The security firm was founded, owned and run by Bárta until he sold the business to his brother when he was appointed transport minister.

The Civic Democrats (ODS) currently have nine ministers, TOP 09 has five, and Public Affairs four. “Some ministers are not up to the job,” Nečas added, hinting at several replacements.

Count on a comeback

So has Bárta’s ambitious plan to gain as much influence as possible over everything been foiled for good? At least when he wasn’t trying to explain cash payments to fellow party members, ABL’s activities, and other reports of dubious practices, Bárta came across as being a relatively sincere person and a considerable number of voters hoped that something better would come from his and John’s party.

But nine months later it has transpired that his rhetoric full of good intentions was just nonsense veiled his true intentions. Nevertheless, Bárta will undoubtedly continue to push ahead with his plan, with him at the forefront or behind the scenes, with VV in power, or in opposition.

It could be given a different name and the puppet master may move puppets forward from a different hidden nook. The electorate may well be more wary, but Bárta will undoubtedly have learnt something and will likely use more sophisticated methods to achieve his goal.