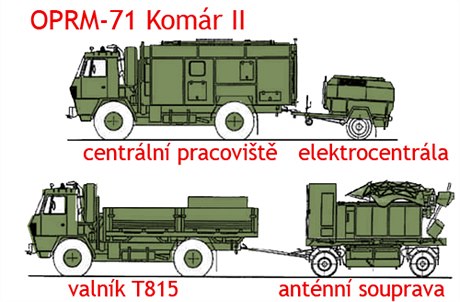 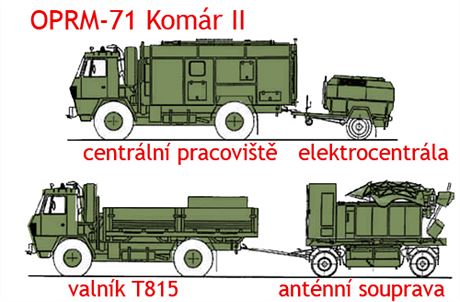 What’s an easy way for the state to lose dozens of millions of crowns in a few short years? The Czech army recently decommissioned a radar that the Ministry of Defense then sold on for a fraction of its value. Such was the fate of the unique Komár 2 (or “Mosquito 2”) radar system developed by Tesla in Pardubice in the 1980s.

In late 2000–early 2001, the ministry under Vladimír Vetchý (Social Democrats, ČSSD) initiated the purchase of the Komár 2 radar system developed by Tesla Pardubice. Following testing, the purchase of the system was sealed in 2002 by Vetchý’s successor, Jaroslav Tvrdík (ČSSD), for Kč 67 million. Czech Position has learned that in 2007, the ministry then sold the Komár 2 system on for just Kč 188,000. A military expert asked by Czech Position said the system has a lifespan of between 10 and 15 years and that even after five-to-six years in operation it would still be worth millions of crowns.

Much less than estimated

The ministry confirmed to Czech Position that the mobile radar system was sold for under Kč 200,000. “The Komár 2 system was classified as unnecessary property for the ministry and sold in 2007 for Kč 188,000” Pejšek said, adding that in February 2007, the system had been valued by the ministry at Kč 482,000. So why did the army sell off thesystem so cheaply?

Otakar Jaroš from the business unit of the company T-CZ, which is the legal representative of thee manufacturer of Komár 2 system, says that the price of the unit should not have fallen below Kč 1 million. “The price would depend on how it is equipped, power units, the locations it operated in and other conditions. The system has a lifespan of 10 to 15 years and after several years in operation it should be worth a seven-digit sum,” Jaroš told Czech Position.

Vlasta Parkanová (formerly with the Christian Democrats–KDU-ČSL, now with TOP 09) was minister of defense when the system was sold in 2007, but she denies having had anything to do with the sale. Parkanová, now deputy speaker of the lower house of the Czech parliament, declined to grant Czech Position an interview and limited communication to a brief text message: “Nothing of the sort was neither negotiated nor approved on my level,” Parkanová stated.

According to the defense ministry’s press department, the decision to decommission the Komár 2 system was taken by Chief of Staff General Pavel Štefka, and the sale contract was later signed by the head of the ministry’s economic section, Tomáš Perutka.

Perutka had been appointed to the post by former defense minister Martin Barták and removed last September by the current minister Alexandr Vondra (ODS) following reports in the daily Mladá fronta Dnes that the company H+V Praha, which won a multi-million crown contract to renovate army barracks and residences, built a house for Perutka.

Štefka and Perutka have not responded to enquiries by Czech Position about the sale of the Komár 2 system.

Antonín Seďa (ČSSD), a member of the parliamentary sub-committee for the control of defense ministry acquisitions and trade in military equipment, said he intends to look into the affair. “The procedure for dealing with unnecessary property is definitely an issue, and there’s the question of whether there was an enquiry to ensure it didn’t end up in a third country,” Seďa told Czech Position.

In response to Czech Position’s enquiries, the defense ministry revealed that the Komár 2 system was sold to the firm Kevint-Inter in 2007 and in the contract no end user is named — other than the buyer. Two other firms reportedly submitted offers for the radar and Kevint-Inter’s offer was the highest.

Seďa says that a parliamentary committee, or the subcommittee for the control of military purchases, could demand that the defense ministry provide more information about the sale. Nevertheless, he admits that the subcommittee doesn’t have the capabilities to scrutinize all purchases and sales made by the ministry.

Why did the army buy something that just a couple of years later it classified as unnecessary? The military strategists counted on the radar system being used by the communications and radio-technical battalions. In short, Komár 2 was to serve field landing strips. “It’s a remarkable thing. Three cargo planes approach the field landing strip and you have a complete system for directing air traffic,” said a former military officer who did not want to be named. Despite its unique features, the radar system was little used, but served as a sample of the military’s technology at exhibitions.

Despite its unique features, the radar system was little used but served as a sample of the military’s technology at exhibitions. “As an example of the system being used at a well-known public event, we can cite the CIAF air show in Hradec Kralový in2002,” Pejšek said.

As to why the Komár 2 system was so under used, Pejšek said that during the reform of the Czech armed forces the use of field landing strips was overestimated. “Because the Komár 2 radar system was designed for field-landing strips, its tactical-technical parameters are designed above all to fulfill the fundamental requirement for high mobility. Because of this, it doesn’t meet several parameters of the ICAO and STANAG norms which at that time were not considered to be a determining factor,” Pejšek said in a written response.

The International Civil Aviation Organization (ICAO) norms are designed with the aim of implementing uniform practices and procedures in civil, not military aviation, whereas the STANAG (standardization agreement) sets out standards and norms for member states of the NATO military alliance to ensure maximum mutual compatibility of equipment and procedures. The Czech Republic became a NATO member three years before Komára 2 was commissioned by the Czech military.

The defense ministry is currently preparing a White Paper that should lay out a long-term vision for the composition of the armed forces, the technical requirements, and how to make best use of the current technology.