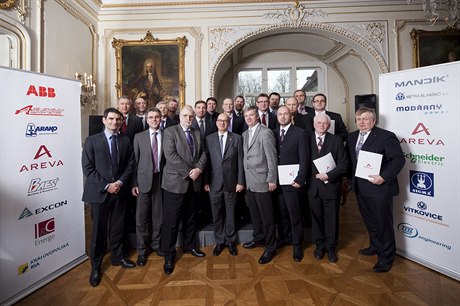 Areva managers and bosses of Czech suppliers at the signing of the memoranda of understanding foto: ©Areva, Česká pozice 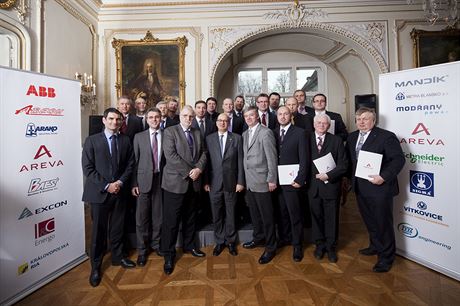 Areva, the French bidder for the estimated Kč150-200 billion contract to build two new nuclear reactors for Czech power giant ČEZ, announced 14 Czech companies that have qualified to be suppliers for the Temelín expansion and other contracts worldwide.

The 14 suppliers, ranging from large firms such as engineering  group Vítkovice Machinery to Arako, an industrial valve producer employing just over 200, are among the first of 140 companies identified by the French multinational as possible providers of goods and services.

“This is an important milestone and an important date for our cooperation and for our aim to land the Temelín contract,” Areva’s chief commercial officer, Ruben Lazo, said following the signing of memoranda of understanding with the Czech companies on Monday. Preparations and vetting of the companies had taken months, he said.

Lazo refused to predict the size of orders the Czech companies might get if Areva’s bid for the Temelín deal is successful. But he reiterated the overall target that 70 percent of the value of the contract price would be localized in the Czech Republic.

Over the past three years, Czech companies have won around more than Kč 1 billion in orders from Areva and negotiations over further contracts worth around  Kč 1.2 billion are under way, Tomas Epron, Areva’s chief representative in the Czech Republic, told Czech Position.

‘This is an important milestone and an important date for our cooperation and for our aim to land the Temelín contract.’

Westinghouse, one of Areva’s rivals for the  Temelín contract, made great play in January of the fact that it signed up the Czech Republic’s biggest construction company, Metrostav, as its exclusive construction partner. It estimated construction work to be worth around 30 percent of the overall contract.

Vítkovice Machinery’s chairman Jan Světlík described the memorandum with Areva as an opportunity to be on its list of suppliers not just for the upcoming Temelín contract but for other nuclear contracts around the world. “It is helpful that we sign a contract with one of the most significant world players in the nuclear industry,” he added.

Areva is also offering the opportunity to become a supplier for its expanding global renewables energy business, Lazo said.

The French ambassador to the Czech Republic, Pierre Lévy, described nuclear cooperation as at the heart of Franco-Czech industrial cooperation. He said the countries have a responsibility going beyond the Temelín contract to restore confidence in the nuclear industry following the accident at Fukushima, Japan, a year ago which resulted in some countries, such as Germany, turning away from nuclear power. France at the start of the year took the lead in forming a group of pro-nuclear energy countries at an EU level.

Three bidders are in the competition to complete Temelín  for almost 70-percent state-owned ČEZ. As well as Areava and US-based Westinghouse, there is a joint venture between Russia’s Atomstrojexport and Czech engineering firm Škoda JS. Bids should be submitted by July 2 with ČEZ deciding on the winner, or whether to go ahead with the contract at all, by the end of 2013.

‘It is helpful that we sign a contract with one of the most significant world players in the nuclear industry.’

Speculation surfaced in one Czech newspaper, Lidové noviny, at the weekend that ČEZ might fear for the future of the Temelín expansion with one unnamed manager saying that the chances of the contract not being awarded were around a third. One of the main worries is, apparently, the low price of electricity and worries whether it will firm sufficiently to make construction of nuclear power plants profitable.

With Areva offering the biggest capacity reactors, presumably at a higher price than its competitors, though the company won’t say, that might seem to put it at a disadvantage. But Areva’s Epron says that the main issue for ČEZ is to make the maximum use of its nuclear site. “The number of sites are limited. When you have a site available you must try to benefit from it as much as possible with the maximum capacity, otherwise you will spoil the site,” he told Czech Position.