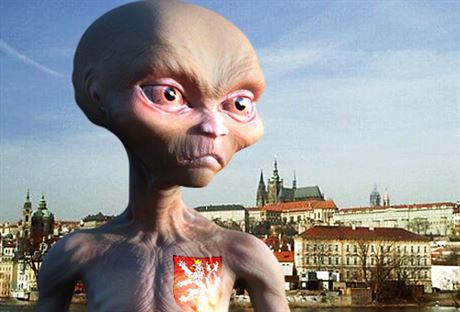 Of all the popular conspiracies, Czechs are most interested in the ones concerning space aliens at Area 51 | foto: © Czech Position, Česká pozice

About a third of Czechs give credence to conspiracy theories that reject the official versions of events, a poll by the Center for Analysis and Empirical Studies (SANEP) shows. The most popular conspiracy theory concerns Area 51 — a US military base where people allege experimentation with alien technology takes place.

Other popular notions among those polled were that the 9/11 terrorist attacks were an “inside job” perpetrated by the US government and that the 1969 moon landing was faked. Not all of the conspiracies are old. There is also some skepticism about the killing of al-Qaeda leader Osama bin Laden.

“The majority of the general public shared the view that official information about globally significant events or facts presented by a variety of media cannot be always true, and that most world powers have reason to purposefully mislead the public and thus manipulate societal opinion,” SANEP said in its report, adding that the vast majority sees the manipulation of facts, motivated by powerful political and private forces, as a serious problem.

Only 2.4 percent of Czech respondents strongly agreed with the idea that information presented by the media about globally significant events was always true, with a further 27.6 percent rather agreeing. People holding the opposite view were more numerous and certain. Some 37 percent said “no” and 24.1 percent “rather no” to the notion.  ‘Most world powers have reason to purposefully mislead the public and thus manipulate societal opinion.’

Even though the mainstream media isn’t fully trusted, not everyone rushes to embrace fringe ideas. The alternative explanations offered by conspiracy theorists appeal strongly to 12.6 percent and moderately appeal to 20.4 percent, totaling 33 percent. These types of theories are strongly rejected by 19.3 percent and moderately rejected by 27.9 percent, or 47.2 percent, still less than a majority.

The idea that the world’s largest public powers have reason to purposefully mislead and manipulate  societal opinion had strong support, with 39.1 percent saying “yes” and 34.8 saying “rather yes,” totaling 73.9 percent. This rejection of the official version creates space for often outlandish alternative explanations. “Indeed, conspiracy theories reject the official version of events precisely because of the efforts to manipulate public opinion,” SANEP said.

A clear majority of Czechs are concerned about the way media information is controlled by special interests. The vast majority of respondents see “social manipulation” — a way of using propaganda to manipulate public behavior — as a serious and dangerous problem that needs to be highlighted. Indeed, 54.4 percent said “yes” and a further 25.9 percent said “rather yes.”

Similarly, a large majority — 36 percent saying “yes” and 39.3 percent saying “rather yes,” for 75.3 percent — believes governments and multinational corporations in their official statements relating to matters of national security or armed conflict intentionally manipulate facts in order to mislead or dupe people.

When it comes to specific conspiracy theories popularly circulating in the media, Czechs are most intrigued by Area 51, a secretive military base in the state of Nevada that is barely acknowledged by the US government.

“The ‘fact’ that this classified military area is full of secrets, ongoing undisclosed experiments using alien technology and bodies of extraterrestrial beings in aggregate is believed by 34.4 percent of respondents. [The idea of] Area 51 has penetrated a number of movies, books and computer games, which undoubtedly contributes to the great popularity and to the worldwide increase in the number of supporters of theories about of UFOs and extraterrestrial civilizations,” SANEP said.

The secrecy around Area 51 has led to a virtual cottage industry of speculation. Many conspiracy theories link the alleged crash of an alien spacecraft in Roswell, New Mexico, to the military base. Several books and websites pose the idea that pieces of a crashed spacecraft and alien  bodies — and possibly even live aliens — were taken to the base and are there to this day. In one book, Dr. Josef Mengele is alleged to have helped create some diminutive people who resembled space aliens.

New theories keep coming. A recently published book claims that Soviet dictator Joseph Stalin used captured German scientists to build a flying disc that looked like a spacecraft in an effort to create widespread panic and chaos in the US. This new theory even ties in Nazi war criminal Dr. Josef Mengele, who is alleged to have helped create some diminutive people who resembled space aliens. The Soviet-built flying machine is what crashed at Roswell — and its wreck was hauled to the top secret Nevada base, according to “Area 51: An Uncensored History of America's Top Secret Military Base” by Annie Jacobsen.

Another popular conspiracy theory among Czechs is that the 9/11 terrorist attacks were actually committed by the US government or one of its secretive security divisions. In total, some 29.5 percent of Czech respondents believe this notion.

“A role is probably played by the antipathy of a certain number of people toward the United States and/or media coverage of materials pointing to a number of technical and other inconsistencies that try to refute the official views of the U.S. federal government. The official US position in relation to this unprecedented act of terrorism, however, is believed by 51.2 percent of respondents,” SANEP said.

This is already the second time SANEP has asked about the event. A larger poll about the incident was conducted May 2–6 and found 31.9 percent believing to some degree that the report of bin Laden’s death was falsified. The new poll, conducted May 13–18, already saw a significant drop.

“Compared to a recent survey … the number of respondents who say the killing of Osama bin Laden was fiction decreased by 7.1 percentage points. This can be understood as a response to the gradual expansion of detailed media information and the confirmation of his death by the militant Islamic group al-Qaeda. Despite this information, however, there is still a large segment of the public that has doubts about the whole event,” SANEP said.

While new conspiracy theories may lack staying power as more facts come to light, some of the classics just keep going. The idea that the 1969 moon landing was staged still has a significant number of Czech adherents. Some 9.7 percent strongly agree and a further 9.1 percent moderately agree— adding up to 18.8 percent or almost one-fifth of the population —  that the moon landing was “targeted fiction” or some sort of hoax. Some 58.3 percent — less that three-fifths — believe that it actually did happen.

Those who are skeptical about the moon landing often claim that a television stage was used to simulate moon’s surface. They point to inconsistencies in shadows, rippling effects from wind and other incongruous details to bolster their arguments. The popular film “Capricorn One,” starring Elliott Gould and O.J. Simpson, showed how such a conspiracy might work although it substituted Mars for the moon.

The survey took place May 13–18 with 9,492 Czech respondents between the ages of 18 and 69. Responses were adjusted according to demographic models. The margin of error was 1.5 percent, according to SANEP.