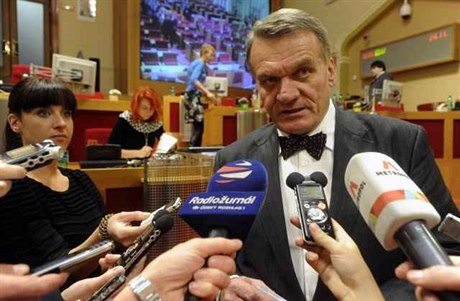 Prague Mayor Bohuslav Svoboda talks with reporters during a meeting of the Prague City Council; according to a study by the civic group Naši politici, in the overwhelming majority of tenders Prague politicians had at least indirect links with the winning companies or businessmen. Svoboda is pledging to clean up the halls of power. foto: © ČTK, Česká pozice 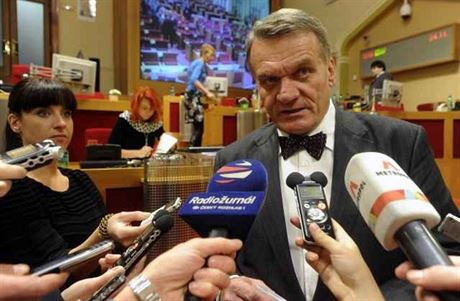 The suspicious cases have been thrown up by the study carried out by the anti-corruption civic association Naši politici, which tracked around 2,000 of the Czech capital’s biggest public tenders over the past four years and sought possible connections between the winning companies and local politicians. Searches made use of publicly available material, such as company declarations, results, and personal property declarations.

‘We identified dozens of cases where fully or partially-owned companies of elected representatives on the statutory organs of the city, or Prague districts,  received significant shares of public tenders.’

“During the period covered from 2006-2011, we identified dozens of cases where fully or partially owned companies of elected representatives on the statutory organs of the city, or Prague districts, received significant shares of public tenders,” the organization said on Friday as it announced its results.

Naši politici is funded by the Endowment Fund Against Corruption (NFPK), Open Society Fund, and Trust For Civil Society in Central and Eastern Europe. The tenders it examined were staged by both Prague City Council, which has an overall budget exceeding some Czech national ministries, and smaller district councils.

Closer examination of the cases showed “many instances of non-standard and problematic relations between politicians and their business partners and even in the ownership structure of companies where councils had a shareholding,” Naši politici said in a statement.

In most cases, politicians had indirect links with the companies or businessmen winning tenders. The association, however, also highlighted on Friday the cases of Prague 15 district mayor Pavel Klega (Civic Democrat, ODS), who from 1998-2003 was the co-owner of the company EL-Ex Spol. Klega has been involved in local district and city politics since 1992, according to his own biography.

Prague 14 mayor Radek Vondra (TOP 09) also shared some of the spotlight for his position as board chairman of the IT company Digital Resources from 2001-2007. “Both companies received millions [of crowns] from public tenders,” the association said.

Naši politici also examined the role of city-owned Trade Centre Praha, which landed a substantial number of public tenders, and its board chairman, Prague 11 councilor Petr Volf (ODS).  One of Volf’s partners in two companies, Jiří Kocánek, also owned another company, Promaco Consulting s.r.o., which was on the receiving end of tenders amounting to tens of millions of crowns from 2008-2011, including two from Prague 11 exceeding Kč 10 million, the group said.

The association followed the money trail for Filip Bušina, a former advisor to Social Democrat (ČSSD) Central Bohemia regional governor and former health minister, David Rath, and one of the top managers and a shareholder in construction company Stavby a.s. The building company received public tenders, often for regional hospitals in central Bohemia, worth hundreds of millions during Bušina’s involvement. The firm was sold in 2010 and changed its name to CGM Czech. “Bušina was charged by Czech Police with tax fraud in 2009,” commented Naši Politici deputy chairman and analyst Jiří Fiala.

The presence of foreign shareholders in municipal companies, sometimes in destinations such as Cyprus, who made use of shell companies is fairly common and complicates attempts to trace owners , Fiala said.

Another disturbing revelation from the pilot project carried out by the civic association is that many companies where Prague City Council did not have a majority shareholding failed to hold public tenders at all for important contracts.

In 112 cases where the city had a partial shareholding ‘there was just one bidder or competitors were excluded.’

Fiala said that Prague was chosen as one of the main focuses of the pilot study because of the large size of its overall tenders and the fact that a lot of material about them was made publicly available — not because it was the worst example of suspected graft. “There seems to have been an attempt to improve the situation in Prague recently,” he commented with regard to Mayor Bohuslav Svoboda’s (ODS) drive to clean up the city’s activities and get to the bottom of shady deals and connections.

Naši politici hopes to expand its studies to other councils across the country and also widen the time frame of its investigations. It plans to unveil a similar pilot study looking at the links between national politicians and spending from central government coffers next week.

In the long-term, the initiative would like to establish an automatic vetting system of Czech public tenders that would allow the links between every company winning tenders and local and national politicians to be screened almost instantly.

That dream is at the moment limited by the association’s own resources, which amounts to two full-time workers and three-four external workers together with a team of volunteers.