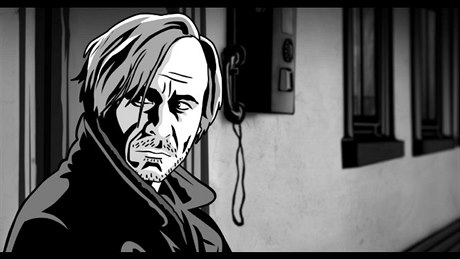 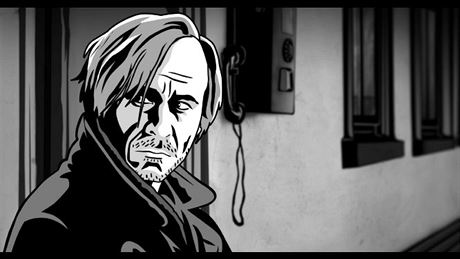 Alois Nebel, a lonely train dispatcher at a small railway station on the Czechoslovak border, lives a quiet life. Only sometimes the fog rolls in and he hallucinates, seeing ghosts and shadows from the dark times of the World War II. One day, a silent stranger appears at the station and propels Alois on the journey to resolving his nightmares...

At a press conference presenting the film “Alois Nebel,” graphic novelist Jaroslav Rudiš recounted how he and co-writer Jaromír 99 (the pen name of Jaromír Švejdík) came up with the original idea for the comic of the same name, on an autumn evening in 2002 at Žižkov’s legendary pub U vystřelenýho oka (The Shot-Out Eye). The success of the first comic “White Brook” (Bílý Potok) had come as a shock to its writers, who assumed it would be an underground production made for their circle of friends.

After its initial success, two more installments followed, “Central Station” (Hlavní nádraží) and “The Golden Mountains” (Zlaté Hory), which were released as a single collection under the title “Alois Nebel” in 2006. Of these, only the first volume had a limited edition in English.

Transferring the comic onto the big screen was significantly less casual, requiring a tremendous investment of time, money and cooperation. Made for around Kč 80 million, the film’s animation took exactly two years and two months to complete, according to its producer Pavel Strnad. At the screening a sample clip was shown that had required 170 drawings and 15 hours of work to complete. It passed in the blink of an eye.

“Alois Nebel” is not your standard drawn or computer animation film. It uses a technique called rotoscoping, in which animators trace over filmed scenes of live action. While most films that have utilized this technique have done so to add colorful, fantastic elements, “Alois Nebel” is done entirely in black and white.

The animation’s dazzling effects come through in creating a stark atmosphere that unites the beautiful Jeseníky mountain setting, the sanatorium in which his hallucinatory memories cause him to be confined and Prague’s seedy Central Station, where he finds a human connection that helps him begin to live again. The rotoscoping also brings innumerable details to life — from surging flood waters to the lights from the trains shining in the mountain’s hazy darkness — the film’s visual stamp is absolutely singular.

Director Tomáš Lunák said that they were looking for ways to adapt comics, with classic animation being an obvious choice. Having seen the use of Rotoscoping in American director of “Slacker” fame Richard Linklater’s 2001 film “Waking Life,” they were compelled to consider it and did a one-minute test with lead actor Miroslav Krobot. The results convinced them to go ahead with the technique.

“Alois Nebel” was shown at both the Venice and Toronto film festivals earlier in September. Heavily laced with significant moments from Czech history, questions about the amount knowledge needed by non-Czechs to follow the film have already appeared in reviews from its festival showings. Strnad conceded that they are considering adding some short explanatory titles to help viewers, particularly with the flashbacks of the 1945 deportations of Sudeten Germans that haunt Nebel throughout the film. ‘I can’t say North Americans know the history of Sudeten Germans, but the story comes across on an emotional level.’

Strnad insists though that there is not too much Czech history for the film to reach an international audience. “I think the story will work abroad, too, mainly on the visual side. I can’t say that North Americans know the history of Sudeten Germans, but the story comes across on an emotional level.”

The producer said the film already has a French distribution deal and with the Toronto Film Festival on the verge of closing he was hoping to hear of a North American deal as well.

A story from the Sudetenland

The film begins in the haunted atmosphere of the Jeseníky mountains near the Polish border, the former easternmost area of the Sudetenland. A man is escaping across the border, being chased by border guards and their dogs. “Alois Nebel” contains its share of dramatic moments, yet the prevailing mood is that of passive observation, as the 20th Century in all its brutality and moral corruption pass by a the window of a small-town stationmaster.

The story itself is presented in flashes and is not always easy to follow. The film’s plot, though, is secondary to becoming immersed in its stylized presentation. As Nebel, Miroslav Krobot’s remarkable performance shines through both the layers of animation drawn over him as well the extremely sedate character he plays. Major historical events are taking place yet the viewer is experiencing them from the vantage point of a regular person. ‘I wrote it under the influence of Bohumil Hrabal because he’s my favorite writer.’

“I wrote it under the influence of Bohumil Hrabal because he’s my favorite writer,” Rudiš said. The associations with Hrabal’s “Closely Watched Trains” and its film version by Jiří Menzel are present yet “Alois Nebel” is neither a comedy nor a heavy, brooding film. For all the dark moments that place in it – murder, interrogations, forced deportation – the film maintains an interesting detachment that keeps the viewer grounded in its main character.

Dealing with major historical issues in a feature film is always challenging, and though the film brings up the issue of Czechs deporting Sudeten Germans after the war it does not do so with much nuance. The “bad guy” in the deportation flashback scenes is able to smoothly transition from Czech nationalism to communist and then capitalist opportunism. For Czech audiences it is clearly an attempt to redress the balance by opening up a fairly closed subject, but it leaves out the legitimate ambivalence that existed between the country’s Czech and German populations in 1945. Not everything can be put in black and white.

“Alois Nebel” will be released on Sept. 29 in theaters throughout the Czech Republic