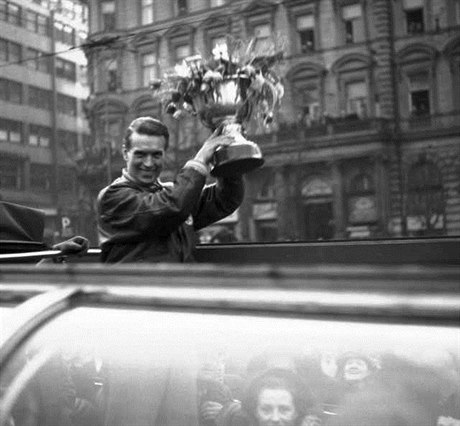 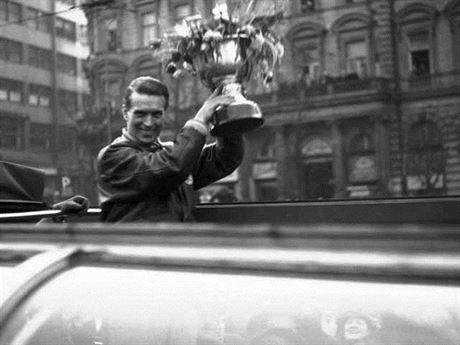 In the late 1940s Bohumil Modrý was on top of the world. As an ice hockey goaltender he had six Czechoslovak championships under his belt as well as World Championship victories in 1947 and 1949. In 1948 his Czechoslovak team won the Olympic silver medal at the games in Switzerland. He was considered to be the best goalie in Europe.

These considerable accomplishments would eventually lead to tragedy for Modrý and his teammates. In 1948 the Czechoslovak team had to cancel a trip to the US in order to go to The Soviet Union and help along the development of what was still a relatively new sport in the USSR. The more experienced Czech and Slovak players planted the seeds of what would become a hockey powerhouse throughout the Cold War. The USSR won its first International Ice Hockey Federation’s (IIHF) World Championship in Stockholm in 1954.

The year 1948 was also when Modrý and his teammates, playing a tournament in Switzerland, were approached by Czech émigrés offering them the chance to defect and pursue their hockey dominance outside of Soviet influence. Modrý even had the offer of a semi-pro contract in Canada. The Czechoslovak government promised him that if the team won the World Championship in 1949 they would allow him to go to there.

When the communist authorities found out about the potential defection, they kept the team from participating in the 1950 World Championships in London, saying that British visa requirements were at fault. The players knew the real reason. And at a regular drinking spot, the pub U Herclíků near the National Theater, they had a rowdy evening of drinking and singing anti-communist songs. The result was a police raid, with some players suspecting that it wasn’t only their seditious words but a desire of the Soviet hockey team to have a dangerous competitor removed from the scene.

Josef Haslinger told Czech Position that Modrý was not among those who suspected a Soviet hockey power play.

“Modrý himself did not believe that the Russians were responsible for the fate of the Czechoslovakian ice hockey team. And my research did not give me any evidence for this. Nevertheless, it is an assumption I have heard quite often,” Haslinger said, adding that he thinks it was fear of defection that sealed the team’s fate.

The players were subjected to brutal interrogations to produce the required “confessions.” Even the pub owner where the players were drinking that night was found guilty in a show trial of high treason and anti-Soviet activities. The so-called labor camp Modrý was sent to in Jáchymov was a place where political prisoners, such as suspect members of the Czech intelligentsia and World War II Czech RAF pilots as well as German prisoners from the war, were subjected to extreme radiation in the uranium mines, guaranteeing them a certain death.

The total death toll of prisoners sent to the uranium mines has only recently been worked out. Five years after his arrival in Jáchymov, severe illness led to Modrý being granted an amnesty. He died at the age of 47 in 1963, having managed in his final years to write articles and training material on hockey goaltending.

At the IIHF World Championship in Bratislava in 2011 Bohumil Modrý was posthumously inducted into the IIHF Hall of Fame. The goaltender’s two daughters, Blanka Modrá and Alena (Modrá) Weismann, were on hand to represent their father.

Haslinger first heard the story of Modrý in 1988 when the late hockey player’s daughter Blanka Modrá acted in a play he had written. Modrá had emigrated from communist Czechoslovakia to live in Austria, where she was pursuing a career as an actress and dancer. When he first heard the story Haslinger didn’t suspect it would play such an important role in his own writing.

“In those days I did not have any intention to write about it. The story was too far away from me: another time, another country, another language, another political system,” he said.

What eventually changed that was a growing familiarity with the Czech Republic itself. Going back and forth between his teaching job in Leipzig and his home in Vienna, Haslinger passed through the Czech Republic twice a week, and began to get to know it better. Around five years ago he stopped in Jáchymov for the first time — and realized it was where Modrá’s father was imprisoned.

This led to him researching postwar Czechoslovak history as well as the history of European ice hockey, and asking Modrá more about her father. “This was the time when I decided to write about this episode.”

Haslinger’s book is a novel, though one which its author insists hews very closely to historical facts.

“I always wanted to write a novel [about Modrý]. On the other hand, I did not want to change or fictionalize the historical facts. The novel should reproduce my real situation of an approach from outside. And so I came up with the idea of a fictional framework.”

This approach came in the form of a fictional publisher whose illness causes him to take a radon treatment at the Jáchymov Spa (Léčebné lázně Jáchymov). The spa claims to be the first radon spa in the world. At the spa the publisher meets a woman researching her father’s death at the communist era concentration camp that was located there much as Haslinger first came to the story through meeting Blanka Modrá.

In order to gain a fuller knowledge of his subject Haslinger took a try-out treatment course at the Jáchymov Spa and began attending hockey games. “It was important for me to visit some places where Modrý lived and where he was imprisoned. It was also important to visit ice hockey games on a regular basis just to get a more intense feeling for this kind of sport.”

There is considerable documentation of the prisoners’ experience of communist era concentration camps, such as this English translation of Modrý’s teammate, Gustav Bubník’s arrest and imprisonment. Bubník was originally sentenced to 14 years compared to Modrý’s 15 years. Haslinger made use of these interviews and other reports from the camps as well as speaking with Modrá about how her family coped during this time.

The Czech translation of Haslinger’s novel was published this week, allowing Czechs a chance to revisit this dark chapter in the country’s history. Jáchymov will be among the novels highlighted on European Literature Night 2012 in Prague on May 16.