The Sorrowful Putto of Prague

The Sorrowful Putto of Prague 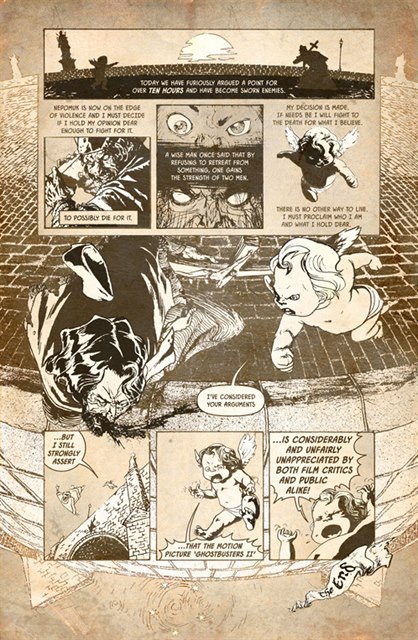 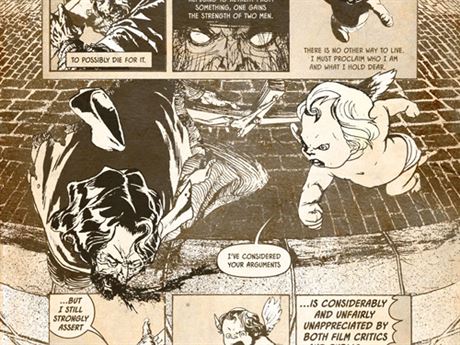 Since 1989 and the reemergence of Prague on the world stage, the city has become ever more closely linked with its Baroque artistic heritage. Write a novel that takes place in Prague and chances are the book will have a photo of a sculpted angel decorating the cover; because these often crumbling, timeworn cherubim have become a virtual shorthand for the soul of the city itself.

This predictably leads to the twin threats of sentimentality and cliché, or as Milan Kundera would put it, kitsch – angel-graced examples of which are easy enough to come by. Many Czech people, incidentally, have had enough of the Baroque and its cute little angels, and are just as likely to sigh in admiration looking at a gilded church interior as a born and bred New Yorker is at the sight of an imposing skyscraper - “Yeah, whatever.”

Relief is on the way though, in the form of Xavier of the House of the Sorrowful Snows, a Baroque putto who has apparently come down from his perch (wherever it was) and is milling about modern day Prague giving more wholesome angels a bad name. Xavier is the creation of Welsh writer James Stafford, whose comic The Sorrowful Putto of Prague brings a strikingly irreverent approach to the city of a thousand spires and one if its more abused images.

Literalab: First of all, where did the idea come from, specifically the really unique, ironic, edgy outlook that Xavier has.

James Stafford: The whole comic is a direct result of me falling in love with everything about Prague.  I adore all the visual elements of Prague: the Baroque; the Gothic; the Art Nouveau; the grey, drab Socialist flats; Cubism; everything. Since I first visited Prague ten years ago I’ve become obsessed with the city and I kept wanting to create some kind of story or art from all the inspiration it has given me.  I can’t draw so it had to be writing, but at the same time I wanted to make something visual.  I love comics and graphic novels so I decided to set about making a comic.  A kind of tribute or love letter to Prague you could say.

I’ve always enjoyed the gross theatricality of the Baroque and am fascinated with the winged cherubs and putti (winged babies) that adorn much of Baroque art and one day, whilst staring at a set of them on a Prague sculpture, it dawned on me how these creatures are often quite eerie and unsettling.  They tend to be so at odds with the events going on around them; especially in Catholic art involving bloodied and beaten martyrs.  I started imaging how peculiar they would look if they were real things and from that snowballed the idea for Xavier and the comic.

“After all I’ve done for this city and what do I get in return? Mother Prague offers herself to me in my hour of need through a stray dog and the remains of a fast food meal,” Xavier

Someone who had lived in Prague for this long would have seen it all: the Holy Roman Empire in all its glory; pogroms; Nazis; alchemists; conmen; revolutions; wars; disease; artistic brilliance; communists; etc.  I’m sure you can agree living through all that would quite likely turn one to drink and cynicism.  As the comic progresses we will see more of his experiences and his world view.

Stafford does not draw and initially had the idea of selecting different guest artists for each issue. That changed when he got in touch with Philippine-based illustrator AJ Bernardo, who though never having been to Prague, has found a stark black and white visual language to show the city and its longest surviving inhabitant.

Unfortunately, Stafford says, Bernardo is not always available to illustrate the Putto so the idea of guest artists will come back into play on occasion. The most recent episode “Disintegratio” is being illustrated by Raluca Moldovan. “The story she is drawing is on a topic we both hold close to our hearts and it’s been great fun,” Stafford said.

Stafford sent a wide array of photos to Bernardo to give him an idea of what he wanted it to look like. The comic logo is based on the image of a Putto lying upon a coat of arms on the side of the church of St. James. “I sent it to AJ and asked him to do a logo based on that, but to add some cigarettes and beer,” Stafford said.

Reading (and listening to) The Putto:

Literalab: Who have The Putto’s readers been so far -  and what are your plans for Xavier in the future?

Stafford: Readership is slowly, but surely picking up. Having it translated into Czech seems to have captured the interest of a lot of people in the Czech/Slovak comic community.  I’m not sure any comic has been done exclusively in Czech and English in this way, so it’s very exciting.

I’m trying to raise funds to make a print edition and actually get it physically produced.  It still feels a little unreal as I can’t hold a publication in my hand.  The ultimatum aim is to get it out there and read by as many people as possible.

I want the website to not only be a comic but a sort of cultural Prague website with music and art. I’m working with musicians to create a soundtrack for the comic and visitors to the site will find a piece of music for each story published.

All the episodes of The Sorrowful Putto of Prague are available here: www.theputto.com/comic/