The Slovak fiction scene – Part I

The Slovak fiction scene – Part I 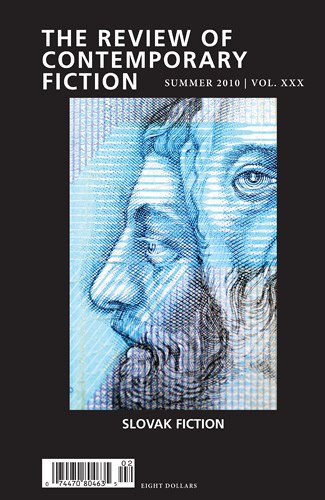 What can you say about Slovak fiction and the need to collect the work of some of its contemporary practitioners without having recourse to the inane cliché that it’s a way of learning about another part of the world? Because while some of the stories in the Dalkey Archive Press’ Review of Contemporary Fiction issue devoted to Slovakia offer insights into the Slovak experience, others have only the faintest connection with anything identifiably Slovak, and are no worse as stories for that.

So then why read it? What is its appeal? The translator Clarice Coulter does a truly admirable job putting a wide range of voices into English without dulling down the differences between them, yet her introduction doesn’t offer any help answering these questions. Paragraphs are headed with phrases such as “Slovaks are storytellers” and “Slovaks are subversive,” claims which could just as easily be made of every nationality on earth.

The best stories in this collection offer much more than interesting international subject matter, they provide glimpses of literary sensibilities different from the range commonly seen in English-language writing. Writing in a tradition where categories of realism and “experimental” writing are much less restrictive and all-encompassing, many of the writers presented here make use of this flexibility by adopting realism, magical realism and other literary approaches as just one of many techniques, not hesitating to abandon that approach within a story if it serves their purposes.

In the following series of reviews I will highlight some of the most striking stories in the collection, the ones that seem to me to represent the kind of unique, refreshingly distinct sensibility that all writers should aspire to have, whether they are from Boston, Brighton, Bratislava or Beijing.

Mrs. Agnes’s Bathroom (Kúpelna pani Ágnes) by Uršula Kovalyk (b. 1969) starts out with the kind of character background information typical of the beginning of a story in the New Yorker. More than that, it explains that Agnes Mickievičová, the main character, isn’t an alcoholic or drug user, thus implying the “realism” of what she will go on to experience later. She and her husband are introduced as a pair of dull, absolutely ordinary 60-year olds in a stable, loveless marriage as gray as the communist world they have lived through all their lives.

The information that Mrs. Mickievičová has never been an alcoholic or tried any psychotropic drugs is repeated a few more times up to the point where she investigates the seemingly ordinary occurrence of a bathroom light being left on. Opening the door she discovers that instead of their typically spotless bathroom there is a tropical jungle, the “useless” lure of which she dutifully resists.

The real in the unreal

But where many writers would dive headlong into the unreality of the hallucination or fantasy that has overtaken the woman Kovalyk delights just as much in the irony of leaping back to the mundane details of Agnes’s life:

“The shiny white tiles, the sink, the bath, and the translucent curtain had all vanished, replaced by a rich, green, virgin forest—trees, liana, and lush, wet leaves from a sort of foreign plant that she had seen once in some encyclopedia. There was no linoleum on the ground—the beautiful linoleum that she and her husband had bought two years ago.”

The process of Agnes letting herself succumb to the nightly appearance of the jungle in the bathroom, although unfolding over only a few short pages, is carried out masterfully. Agnes’s initial fears of madness are blended with her husband’s fairly passive attempts to get her to snap out of whatever is causing her to behave so strangely along with the hilarious back and forth between the purest exoticism and the most ordinary everyday details.

The story is from Kovalyk’s second collection of short stories Travesty Show (Travesty šou). Interestingly, the only other story by the author I found in English translation  is not only from the same book but echoes Mrs. Agnes’s Bathroom so closely that it’s worth pointing out.

Moonmaiden, published in a collection titled the Literary Anthology of Visegrád 4 countries, is the story of a woman named Marta who waits for everyone in her family to fall asleep before sitting alone in her living room, where the glow of the moon is the backdrop for a photograph coming to life. Not as strong or as dark as Mrs. Agnes’s Bathroom it nevertheless shows how Kovalyk is skillfully working through some fundamental concerns about women’s ability to balance the claims of the everyday world and their own imagination and inner life.