‘The Case of the General’s Thumb’ by Andrey Kurkov

‘The Case of the General’s Thumb’ by Andrey Kurkov 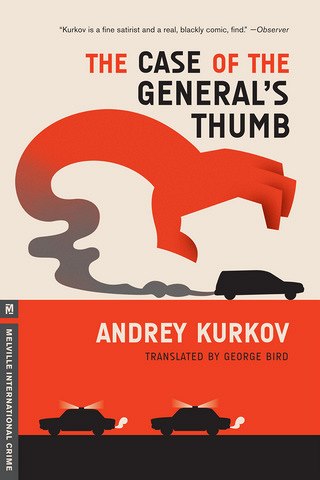 “As in the Soviet past, bright new futures were elusive. Which didn’t mean they wouldn’t come, only that some cost was involved. And in these infant days of Slav capitalism, anything good – bright future included – was extremely pricey. Free, gratis and for nothing was a concept of the past.”

- from The Case of the General’s Thumb by Andrey Kurkov

The first two Andrey Kurkov novels published in the US – Death and the Penguin and Penguin Lost – depict a post-Soviet universe where the difference between a life of plenty and sudden death is the merest thread. One instant you are luxuriating in a villa with gold-plated bathroom fixtures, a fridge full of Dom Perignon and minions prepared to do your bidding at the snap of your fingers, while the next moment you are a bloodied corpse being scraped up off the pavement.

Kurkov’s latest novel, The Case of the General’s Thumb, continues in this dark, comedic vein, though without a lovingly rendered aquatic bird (though a tortoise named Nina briefly plays a similar role as Misha did).

The novel is being advertised by its publishers as “Le Carré meets Bulgakov,” which is an evocative and effective tagline to a degree, but looked at a little more closely actually obscures how strange and brilliant a book this really is. So what kind of novels does Kurkov write?

Like Le Carré he deals with deadly intrigues where intelligence forces, politicians and moneyed interests operate in a shadowy world that remains impenetrable to ordinary people. Yet while Le Carré undercuts the apparent motives of his spies – such as patriotism, fighting for justice and freedom, the thrill of the chase – Kurkov takes the total lack of these qualities as his starting point. His spies and agents start out disillusioned and are not at all surprised by the futility of the risky and always bloody operations they carry out.

The novel begins with what turns out to be a general’s corpse (minus a thumb) tied to a Coca-Cola balloon going airborne. Then it alternates between two initially disconnected stories. One features the very ordinary Police Lieutenant Viktor Slutsky being assigned to a case he suspects is well beyond his abilities to solve. What’s worse is that he doesn’t know who chose him to carry out this investigation, nor does he know the identity of his anonymous liaison.

The other protagonist, Nik Tensky, is preoccupied with moving his family from Tadzhikistan to Kiev when he is handed a potentially lucrative yet obscure assignment that will take him on a road trip through Europe with a partner he is expected to kill.

Putting the squeeze on a Russian working at a German restaurant, Nik’s conscience briefly acts up before he finds a justification for what he and his partner Sakhno are doing. “Only this was not the world he’d known as a soldier, but a more complex one where so much, so many people – this simple, genial little old man included – were not what they seemed. So why worry.” he thinks to himself.

This chilling brush off is followed by Nik thinking that as long as they do as they’re told everything will become clear. This is a logical assumption, of course, except that the only role logic plays in the world Kurkov depicts is a deceptive one, a square peg that can’t be forced into the round hole of post-Soviet life.

For most of the book the connection between the two protagonists’ missions is impossible to determine. The parallels between them can’t be found in the plot, but elsewhere. They are two essentially good but imperfect people seemingly chosen at random, seemingly involved in situations beyond their experience and abilities. They receive their orders from powers they can’t identify, but which seem friendly at the outset.

During communism there was much talk of the New Soviet Man or Homo Sovieticus - which term you used depending on which side you were on. Nik and Viktor are Homo Post-Sovieticus, representative of the ordinary people of the former Soviet Union who remain in thrall to forces they no longer understand or can even identify.

It is as if the realism most novelists ascribe to doesn’t apply to post-Soviet life so Kurkov turns to other means to express this reality. When the two stories do eventually connect it has less resemblance to an espionage novel than a surrealist poem.

So then what about the Bulgakov comparison? None of the Kurkov novels that I have read venture into ancient history, science fiction or the supernatural. What they share with his fellow Russian-language writer from Kiev is a grappling with terrible times and events by transforming them into comedy. It is not only that both of these writers manage to achieve a strong comic effect, but that they never flinch from the horrific as they aim for laughs.

Most writers faced with the Stalinist Terror of the ‘30s or the turbulent ‘90s after the collapse  of the Soviet Union would hesitate before turning so many people’s pain into laughter. “How could you laugh about that?” they would ask in horror. And a novel like The Case of the General’s Thumb, no less than The Master and Margarita or Heart of a Dog, responds with a humanity-saving question of its own, “How couldn’t you laugh?”