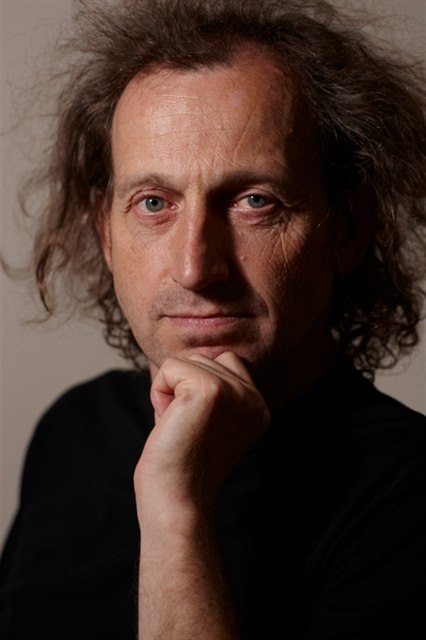 Czech author and publisher Martin Vopěnka was a guest at the Prague Writers’ Festival in 2012 and spoke to literalab about his path to becoming a writer, the influence of his studying physics on his most recent novel and his foray into children’s and young adult fiction in The Sleeping City.

Vopěnka is the son of renowned mathematician Petr Vopěnka and said the communist regime didn’t make his path to literature particularly smooth. “My political profile wasn’t good so during communism I couldn’t study what I wanted to,” he said. This difficulty was compounded by the fact that what passed as his chosen subject of philosophy at that time didn’t hark back to Plato and Aristotle so much as to Marx and Lenin.

So the future writer opted to study nuclear physics though he admits now that he didn’t like it. His father’s interests also played a role in pushing him toward the hard sciences. When the Velvet Revolution came Vopěnka was free to return to his original goal. “I have wanted to write all my life, since I was 10 years old.” Taking a job manning a room-sized computer at a psychiatric institute Vopěnka lucked into the ideal job for a writer-in-training.

“It was a Romanian computer which broke down very often. Each time it didn’t work we had to wait two weeks until someone came from Romania to fix it. So it was the best place for writing and reading.”

Today, Vopěnka alternates between his passion of writing and his work as the head of Prah publishing house. While Vopěnka writes what is commonly classified as literary fiction he says his publishing business aims more for the mainstream, publishing the Czech translations of Walter Isaacson’s biography of Steve Jobs as well as Tony Blair’s autobiography.

“My profession is publishing books, but what I really like to do is writing. In a small country it’s impossible to live off of writing,” Vopěnka said [Editor’s note – it’s impossible in big and medium-sized countries too].

Vopěnka’s latest novel is titled The Fifth Dimension and tells the story of a bankrupt Czech banker who agrees to participate in an experiment in exchange for a large amount of money. The experiment consists of him spending months in supposed solitude high up in the Argentine Andes, though it becomes clear that he isn’t alone.

Ironically, Vopěnka had the story idea first and then set off for Argentina himself to give the story a well-observed setting. Being so high up and close to the stars allowed him to make use of his study of physics. “For me it’s a very important book. It has everything I know about the universe in it. It was the first time I was glad I had studied theoretical physics.”

So far the only book of Vopěnka’s to appear in English translation is Ballad of Descent, which was translated by Anna Bryson and published by Northwestern University Press. Vopěnka admits to being disappointed that this book, his first, is the only work of his to come out in English, and is hopeful that The Fifth Dimension will be made available to English-speaking readers. One advantage the book has in drawing publishers’ interest is the fact that it has already been translated in full by Anna Bryson.

The end of parenting

Vopěnka gives credit for his writing a children’s book to his own children, and has created a world corresponding to the vague hopes and fears universal to children everywhere. The Sleeping City begins with a group of young siblings waking up and seeing their parents still asleep. As the day progresses it becomes clear that not only their parents, but all parents all over the world are trapped in sleep.

The Sleeping City is the first part of a trilogy that will eventually include Sleeping Justice and The Sleeping Mystery. The second book in the series will come out in Czech in 2012 while translations of the first book have also come out in Slovak and Romanian.

Vopěnka has been going to schools and libraries to present the book and has been surprised to find that the initial age group he envisioned for the book was just a bit off.

“Originally, it was meant for children from the age of twelve, but I’ve found that because younger children are more attached to their parents the idea of them living in a world without them has more impact whereas older children would rather their parents stay asleep,” Vopěnka said, adding that the book’s ideal audience is children up to 13, who will see the story as a kind of wish fulfillment, and parents, who will read about a world taken over by children as horror.

For more on Central European literature go to literalab.com