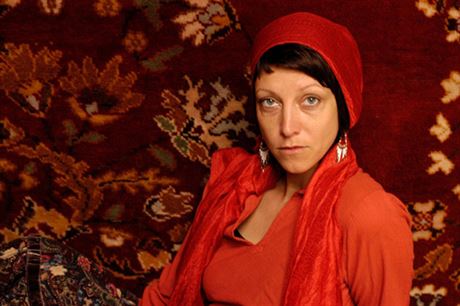 One of the most striking stories in the Slovak fiction issue of Dalkey Archive Press 2010 Review of Contemporary Fiction was Uršula Kovalyk’s “Mrs. Agnes’s Bathroom,” a story of an ordinary old woman’s descent or release into an unreal tropical dream world that just happens to appear in her bathroom one night.

A poet, fiction writer, playwright and social worker living in the Slovak capital of Bratislava, Kovalyk is also director of the Theatre With No Home (Divadlo bez domova), an acting company made up of homeless and disabled actors. Previously she workedfor a women’s non-profit focusing on women’s rights and now works for the NGO Against the Current, which helps homeless people.

Kovalyk has published extensively in Slovakia, with the role of women being central to her work. Her most recent story “Čipka” (The Lace) will come out in a bilingual edition in September in Two Lines, an annual anthology of international writing in translation that has “noir literature” as its 2011 theme. The story was translated by Julia Sherwood.

literalab:In “Mrs. Agnes’s Bathroom” and “Moonmaiden” there is a very interesting and unique mix of realism and fantastical elements. How did you arrive at that particular style and is your current writing in a similar style?

Uršula Kovalyk:I don’t know exactly how I came to that style. In any case, I’ve always been fascinated by writers like G.G.Márquez, Isabel Allende, Virginia Woolf, that had magical elements in their work. I really dislike talking about my writing style though, because I’m not a literary theorist and honestly, when I write I don’t think about what style to use.

Style is only the form but it’s content that’s really important to me. You can learn a style in a writing course, but your content is something you have to experience and live through yourself, or observe very closely. All of my stories are different because each theme I’m writing about demands its own specific style. Sometimes my writing is extremely dreamlike and abstract, but then sometimes terse and direct.

literalab:Has your work with Theatre With No Home or any of your previous work experience influenced your writing or do you keep those parts of your life separate? Have you ever written about experiences or characters from your other work?

Kovalyk:Everything I’ve lived through has influenced me. My writing, my personal and professional life are all intertwined.  It’s impossible to separate them. I work with people and am a supervisor as a social worker, which is what I studied. It seems logical to me that certain situations and types of personalities and emotions would make their way into my stories. I’m an observer and love watching people – how they live, what tactics they use to survive, what brings them joy or suffering, what they feel.

I would never be able to work in some kind of technical field. I need people. The Theatre With No Home is an extremely interesting social project. It’s thanks to it that I’ve gotten to know many “strange” men and women. Our actors are people living on the street, alcoholics, some are drug addicts, others are physically handicapped. A lot of them taught me about  human fear, failure and illusion. Their world is tough, but extremely real and true. They’re much easier to read than healthy businessmen in suits and ties.

literalab:Do you see Slovak writing as having a clear identity of its own, and if so, how would you describe it?

Kovalyk:I don’t really think about Slovak writing. To me it doesn’t have a clear identity. Every Slovak writer has his or her own very distinct identity. I’ll tell you though what I think Slovak writing is missing, and that’s slang.  Slovak slang in literature is still in its infancy and I personally don’t like reading things written in a Slovak that no one actually speaks.

literalab:Do you read, for example, a Polish writer like Olga Tokarczuk – or a Czech or Hungarian writer – and feel that there is a Central European sensibility you all share that distinguishes you from writers who come from, for example, the UK, US etc.?

Kovalyk:Yes, I’ve read [Olga Tokarczuk’s] House of Day, House of Night. She’s a great writer. I also read some Czech writers. I like Petra Hůlová, Věra Chase, Franz Kafka, Ivan Diviš and [poet J.H.] Krchovský. I haven’t read many Hungarian authors, though I’ve read Sándor Márai and Endre Ady, and I want to read Margit Kaffka; it’s just that I haven’t managed to find her work in Czech or Slovak translation and my Hungarian isn’t that good. I’ve read about her on Wikipedia and she strikes me as a very interesting woman.

literalab:Who are some of your favorite writers - Slovak and international, past and present?

Kovalyk: There are a lot. It would be a very long list and I would feel bad for leaving someone out. Because I once worked in a bookstore I read too much and wrote a lot less. Now it’s more the other way around. I love reading Latin American writers. Their books are so colorful, fragrant even. I love Agatha Christie, and Muriel Barbery’s novel The Elegance of the Hedgehog has really stuck in my memory too. Right now I’m reading a book of short stories by Kenzaburo Oe.

literalab:Have you ever written or do you think you will ever write a novel or do you prefer short stories and the theater?

Kovalyk:My last book, The Secondhand Woman (Žena zo sekáča 2008), was a novel, though I love writing short stories. It can be much more powerful writing, when you have to really pin a name on something without being able to use a lot of words. Besides that, I don’t have much free time and a novel is a long process. I can’t say that I prefer one form over the other though.