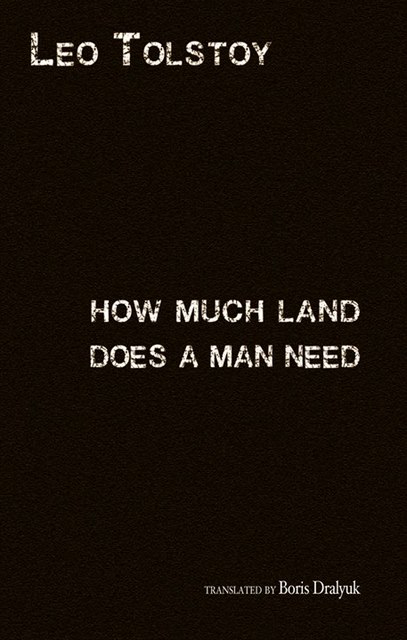 Choosing a new translation of a lesser known work by Leo Tolstoy - How Much Land Does a Man Need - for its inaugural publication, as Calypso Editions has done, might not seem the most typical choice for an independent publisher. The short story is a moral fable of a peasant lured by the devil into an unquenchable thirst to acquire land, and is definitely engrossing. Yet far from relying on a readable text and well-known name to attract interest the new edition answers a major need for English-language readers.

I assumed that if there was a new translation of Tolstoy it was because the previous translation was one of those quaint Victorian-era renditions where the slightest sexual innuendo was made to disappear and the street urchins of Petersburg sounded like they had been transported straight out of the pages of Dickens - Cockney and all.

It turns out I was wrong. The Penguin translation I have by Ronald Wilks dates from 1993, yet the new translation is so strikingly different that a century may as well have elapsed between them.

The key is Boris Dralyuk’s manner of translating the Russian Skaz form, a traditional Russian oral narration device. Translating colloquial speech and slang is notoriously difficult, but rather than smoothing over the challenges by putting it in traditional narrative form Dralyuk has captured the tone of the original and finally created an English version of the story Tolstoy actually wrote.

For an equivalent in English, imagine translations of rap lyrics where the basic meaning is kept while its colloquial character is thrown out the window. So a rapper wouldn’t be “rollin’ six deep with tha homies in the hood” but “driving with five friends from his neighborhood.” Not quite the same effect.

A comparison of the translations is telling. Here is a sample of the opening dialogue in the Wilks translation, a conversation between two sisters that sets the whole tale on its way: “I wouldn’t care to change my life for yours,” she said. “I admit mine is dull, but at least we have no worries. You live in grander style, but you must do a great deal of business or you’ll be ruined.”

And the Calypso: “I wouldn’t swap my living for yours,” the younger sister said. “Our life is drab, I grant you, but we know nothing of fear. Your life may be tidier, but you either make a fortune or lose the whole lot in it.”

And the difference isn’t only apparent in the dialogue, but in the main character Pakhom’s manner of thinking as well as the narration itself. This helps show that the devil in the story isn’t the slick sophist who Dostoevsky has argue with Ivan Karamazov, but a grimy, little runt with horns and hooves hiding out behind a peasant’s stove looking for a victim.

Here is Pakhom talking himself into setting out for the land of the Bashkirs for his biggest land grab of all:

Penguin: “Well,” Pakhom thought, “Why should I pay a thousand roubles for thirteen hundred acres and saddle myself with debt? To think what I could buy with the same money down there!”

Calypso: “Well,” thought Pakhom, “why should I spend my thousand rubles for five hundred dessiatinas, and hang a debt around my neck besides. Look here what I can get hold of for a thousand rubles!”

People who saddle themselves with debt wear waistcoats and monocles. A tough-minded farmer like Pakhom is far more likely to hang a debt around his neck. And by offering the Russian text on alternating pages Russian readers can see that Dralyuk repeats the sum of a thousand rubles as it appears in the original, rather than substituting “the same money” as if Tolstoy somehow didn’t know what he was doing.

Tolstoy’s use of repetition has been a much commented on feature of his writing, so it is surprising that translators still try to “improve” on it. In The Art of the Novel Milan Kundera, via Nabokov’s commentary on Anna Karenina, mentions how often translators insist on using synonyms for the words “house” and “said” (skazal). Dralyuk’s translation avoids this pointless pitfall and gives a truly fresh take on a classic writer.

When someone reviews a new edition of Tolstoy they generally only review the translation and not the book itself because, well . . it’s Tolstoy. This novella is as typically excellent as almost everything else he wrote, though there is one aspect of his moral fable that seems somewhat ironic. Tolstoy expresses Pakhom’s “greed” by showing  how the farmer isn’t satisfied with the 15 dessiatinas (40.5 acres) of land he first buys, nor with the 50 he gets next, and so on. And yet Tolstoy was presumably writing this story at Yasnaya Polyana, his almost 1,500 dessiatina country estate (although he also could have written it in his two-story house in Moscow). His general point remains valid, but still . . .