Kafka and Schulz on display in Stockholm

Kafka and Schulz on display in Stockholm 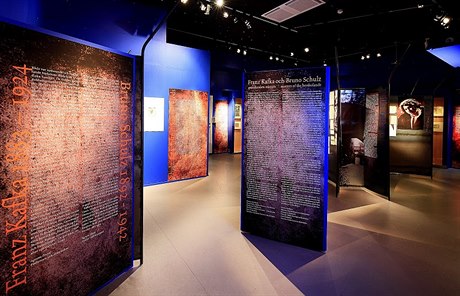 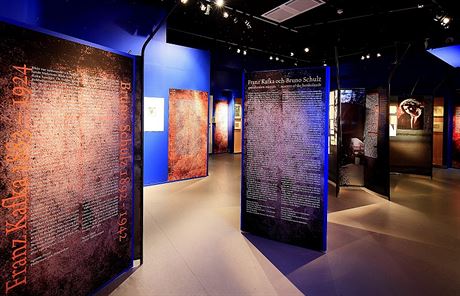 Masters of the Borderland exhibit ties two 20th Century literary giants to Central Europe’s Jewish past and its role in their work.

Writers are faced with an array of choices – of subject, style, even what name to publish under – but we tend not to think of their language as a matter of choice. We know of the extreme cases of Beckett, Conrad, Kundera and Nabokov, and so assume that writers might choose one language over another when they become severed from their homeland, even if only in spirit.

In Central Europe the situation was different. Writers like Joseph Roth and Bruno Schulz grew up in multiethnic, multilingual areas of what was then Polish Galicia - today’s Ukraine - and had a number of potential languages at their fingertips. It might be tempting to compare their situation to that of bi-lingual children in our increasingly global world, but choosing between English and Spanish or French, for example, doesn’t have the same ramifications that the choice between Yiddish, Polish and German had for these Jewish sons of Europe’s borderlands.

As it happened, Roth chose German, while Schulz opted to write in Polish even though his German was fluent too. In Prague Franz Kafka had German as a pre-ordained choice. His Czech was never fluent and his parent’s Yiddish was already distant for him in place and time. Later efforts to reconnect to the Yiddish theater and even to imagine himself speaking Hebrew in Palestine were like a distant reflection of that same choice.

In “Franz Kafka and Bruno Schulz - Masters of the Borderland” at the Jewish Museum in Stockholm issues such as language and identity so crucial for these literary visionaries form the core of the ongoing exhibit. Nearly a decade younger than Kafka, Schulz became aware of the affinity between them as Kafka’s work became more widely known. In 1936 a translation of The Trial was published in Polish under Schulz’s name though it is generally believed to be the work of his fiancée.

Deeply shy and in mixed awe and terror of their fathers, the two writers were both of the Central European Jewish generation assimilating to modern urban life and thus were losing touch with the religion and tradition that were still the loose framework of much of their parents’ and own generation’s lives. Neither Kafka nor Schulz though were able to abide by loose frameworks, and their impossible demands of personal reinvention only succeeded at the level of literary and artistic style.

While Kafka is acknowledged as a giant of world literature, Schulz is much less well-known, so one of the declared aims of the exhibit is to bring his writing and engraving to a wider public. The exhibition was as multilingual a collaborative effort as the world it depicts, involving the directors of the Czech Centre, the Polish Institute and Stockholm’s Jewish Museum, as well as Swedish writer Agneta Pleijel.