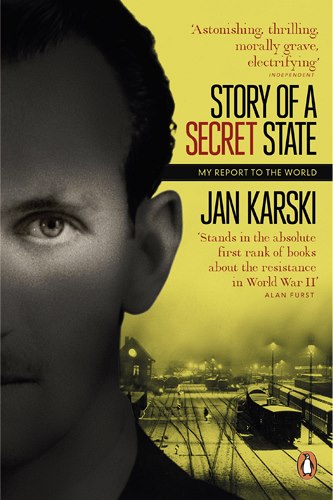 On April 23, 2012 US President Barack Obama announced that he would award the Presidential Medal of Freedom, the country’s highest honor, to Polish Resistance fighter Jan Karski. Earlier this year in Poland the parliament announced the commemoration of Karski’s centennial in 2014, including a monument to be built to him in Warsaw as well as one of the city’s street to be given his name.

Born Jan Kozielewski, the invasion of Poland by Nazi and Soviet forces in 1939 saw the redubbed Karski (among other cover names) transformed from a careless playboy to a highly effective and trusted member of the Polish Underground.

Karski is most often cited for the first-hand account of the death camps and genocide of Europe’s Jewish population he gave to world leaders during World War II. Reading his book, Story of a Secret State, provides a much fuller picture of the range of Karski’s wartime activities and a gripping and highly informative account of the Polish Resistance up to 1944 when the book was first published.

When most people think of World War II Resistance fighters they picture someone in a trench coat standing in a darkened doorway, furiously puffing away at a cigarette, all the while waiting for the opportunity to carry out an assassination or act of sabotage. Of course underground fighters did their share of these eminently filmable acts, but reading Karski’s book it is clear that the Polish Resistance in particular had a much further-reaching goal, one less easily visualized and romanticized, and one which probably didn’t seem as vitally necessary to resistance movements in France or other western countries – that of ensuring the survival of the Polish state.

On the way out of the country to reach the Polish government in exile in France, Karski crosses into Soviet-occupied territory to be briefed by a Resistance organizer named Borecki. “That is our purpose,” Borecki told him, “to maintain the continuity of the Polish state which, merely by accident, had to descend into the Underground.” This meant that all the legal and institutional structures of Poland had to be given an underground equivalent. After over a century of foreign rule under the partition Polish leaders were steadfast in making sure that Poland remained in existence throughout Soviet and Nazi occupation and it is notable that, as Karski writes, there was “not a single political office in the German administration held by a Pole.”

Besides the overreaching objects of the Resistance, Karski documents the necessities of everyday life in the Underground, where having a few names and apartments to choose from were often a prerequisite for survival. He writes about the difficulty of operating in a place you are widely known: “It is almost as difficult to be tight-lipped to a smiling friend as it is to remain silent under Gestapo torture,” he writes upon his return to Warsaw.

He also calls attention to the largely unheralded liaison women who served as messengers between Underground operatives and who were constantly exposed to arrest and execution. “The average ‘life’ of a liaison woman did not exceed a few months,” Karski writes. Other issues such as the effort to maintain a Polish education system and other actions meant to strengthen national solidarity are brought to life in the narrative.

The new edition of the book adds some information unavailable to Karski in 1944. So when he is caught by the Gestapo in Slovakia he watches his guide taken away, bleeding, and writes that he “never saw or heard of [him] again.” The notes at the end of the book inform us that Franciszek Musiał, a baker dubbed “the mouse” who served the Resistance as a guide through the mountain border between Poland and Slovakia, was tortured by the Gestapo and shipped off to various concentration camps, but survived and lived until the late ‘70s.

Sadly, the accounts of surviving Resistance members are far outweighed by those who were caught and killed. By so effectively bringing some of these characters to life in describing his interactions with them Karski leads the reader quite naturally into imagining their futures without realizing that they don’t have futures.

Nowhere is this felt more strongly than in the chapters following Karski’s escape from his Gestapo torturers, when he is brought to rest at the country manor of the Sawa family. The vivid contrast of rural life to the starved, wretched existence of Poland’s cities and the sense that the war is far away give this section an idyllic feel, as if the reader is recuperating along with Karski. What’s more, Karski so vividly renders his hosts – the earnest and sensitive daughter of the house, her carefree, skirt-chasing brother who has a more serious side, their reserved, dignified old-world mother – that it has the effect of briefly transforming a wartime memoir into a 19th century novel.

The interaction between Karski and the young Danuta Sawa, by turns flirtatious and contentious would, in a novel, almost inevitably lead to romance and a life together. Instead, the arrest of her brother make it dangerous for Karski to stay and after a scene of tearful goodbyes with Danuta he provides an epilogue to this interrupted novel:

“I never saw the Sawas again. Months later in Cracow, I heard of their fate. My informants disclosed to me that the entire family had been arrested by the Nazis, tortured, and executed.”

The plight of Polish Jews doesn’t play a large role in the book until the final chapters when Karski takes part in a meeting with two Jewish Underground leaders in a “huge, empty, and half-ruined house in the suburbs.” From that moment you realize that the Jewish issue enters the story late not only because of its chronological place in the book’s events, but because it reveals the lowest depths of misery and human capacity for evil.

“I know history. I have learned a great deal about the evolution of nations, political systems, social doctrines, methods of conquest, persecution and extermination, and I know, too, that never in the history of mankind, never anywhere in the realm of human relations did anything occur to compare with what was inflicted on the Jewish population of Poland,” Karski writes.

Considering all the books and films that have depicted the Holocaust it is understandable that people might feel they have reached a saturation point where shock is no longer possible. Reading about Karski’s forays into the Warsaw ghetto and into an annex of the Belzec death camp disguised as a guard will shatter that notion. Somehow the idea that someone could enter those hells on earth and then leave, as if through a trap door, carrying with them memories of what they had seen, gives Karski’s account an added level of impact.

The Jewish Underground leaders who provided Karski passage into the ghetto and death camp not only warned him that he would be risking his life; they also, Karski writes “told me, too, that as long as I lived I would be haunted by the memory of the ghastly scenes I would witness,” the truth of which he later confirms, referring to what he had seen as his “permanent possessions.”

Karski’s insider view also reveals that the Warsaw Ghetto Uprising was seen less as a battle with strategic goals – the Jewish leaders had no illusions of its possibility of success – than as “a demonstration and a reproach” to the world that had allowed the barbarity they underwent to happen (and, considering the Allies passivity and disbelief of Karski's account of the death camps, they would continue to allow happening).

By turns a spy thriller, historical document and vivid portrait of human responses to war and mass murder, Karski’s book is a unique account of a unique and terrible period of human history.