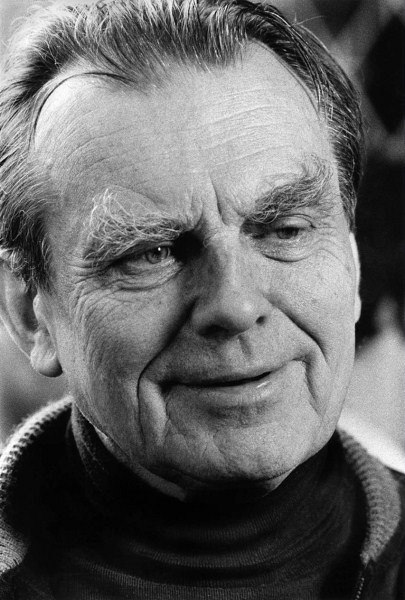 Is the poet who engaged in grimace contests being fixed into the useful image of a European literary saint?

The centenary of Czesław Miłosz falls on June 30 of this year amidst a more than yearlong array of festivals, readings, official declarations and celebrations stretching from the poet’s birthplace in Lithuania to Poland and the rest of Europe and North America. Yet Miłosz’s legacy is so large in many respects that it has seemingly been adapted to the needs of each particular celebration.

For Lithuanian President Dalia Grybauskaite laying a memorial plaque at Vilnius University the poet’s work is a testament to Polish-Lithuanian solidarity. And why not? Undoubtedly someone from the EU has already harnessed the Miłosz brand to the cultural vitality of the European project, while his American admirers have opted to have him represent freedom and a resistance to the easy answers of –isms of any kind. Again, all true enough.

To these one can add Miłosz as defender and defining participant of Central European culture as well as the adherents of a massive body of work that was written in Polish, regardless of where the poet was born or was currently living. All valid viewpoints, and there is no doubt he deserves the plaques and seminars and to have his poems displayed on the London Tube. Yet there is a tendency for canonized literary giants to become simplified in processes like this and the thoughts and development of Czesław Miłosz over his ninety-four year life hardly lend themselves to simplicity.

In an ideal world all the events of the Year of Miłosz would be a starting point for people to begin the journey of discovering his poetry, essays and novels. As even the most glancing acquaintance with Miłosz’s work and the times he lived through make clear though, this is not an ideal world, and plaques tend to have more of a funereal sense of ending than to open a door into a passionate and irreverent poetic mind.

One centenary event taking place throughout 2011 is the Letters to Miłosz series in which various European writers address letters to Miłosz with the themes and ideas of his autobiography Native Realm (Rodzinna Europa) in mind. The first of these readings took place in Prague on March 16 with the Czech novelist Petra Hůlová and head of Belarusian Radio Free Europe Alexander Lukashuk.

Hůlová told me that she prepared her somewhat provocative, irreverent letter in the spirit of the issues that Miłosz wrote about that affected her the most deeply. But when she arrived at the reading and heard the official, introductory speeches she realized how sharply her own approach veered from the veneration taking place around her. Her mutual mocking of both effete, perfumed Western Europeans and the primitive, smelly Eastern Europeans must have ruffled some feathers.

Having lived to such an old age and reaching such a majestic literary status has obscured to some degree Miłosz’s ability to ruffle feathers – and not only politically, for he managed to be disliked by both the right and left and various times throughout his life, but in his literary stances and cultural outlook as well.

Reading Milosz’s essays and the often provocative opinions put forth in them as well as the selection of writers, artists, philosophers and friends he chose to write about – people like Witold Gombrowicz, Stanisław Witkiewicz, Lev Shestov and others - leads me to prefer a less reverent approach to the 100th anniversary of his birth. People should certainly take advantage of the festivals and events still to come throughout 2011, but as an introduction that will send them back to Milosz’s writing itself, so that everyone can judge the significance of his legacy for themselves.

For more on the year’s events as well as a selection of poems and other texts go to: www.Miłosz365.eu