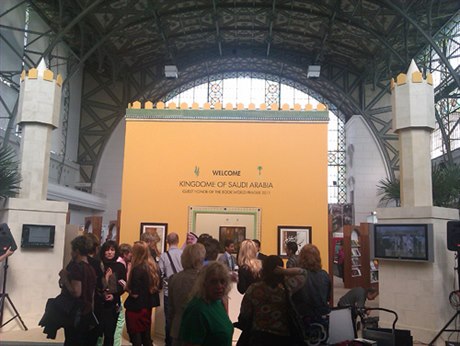 The castle within the palace at Book World Prague 2011 foto: © CZECHPOSITION, Česká pozice 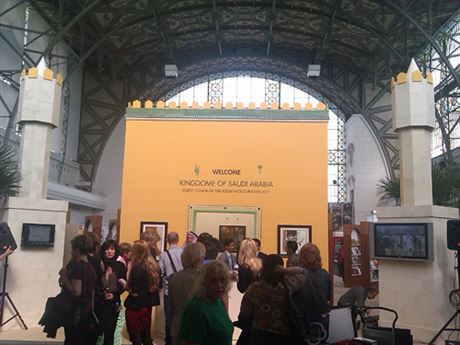 Book World Prague kicked off May 12 at the historic Industrial Palace, site of the Communist Party congress for 41 years during the regime of the same name. That the political landscape has changed considerably is evident even before stepping inside the building.

With the opening ceremony approaching, the palace’s imposing art-nouveau façade was matched by a similarly imposing display of black luxury cars with diplomatic plates sporting flags of largely Middle Eastern origin. This year’s guest of honor is the Kingdom of Saudi Arabia and next to the VIP parking was a luxurious mock tent with hosts wearing a combination of ankle-length traditional dress and slick business suits.

Show your ticket to the Neo-Nazi skinheads that often serve as security guards in this country and it is clear that Marxism-Leninism has been outlasted by some of its more extreme right wing competition.

One reference to the former regime was entirely positive when the Jiří Theiner Award for 2011 was given to Polish translator Andrzej Sławomir Jagodziński. The prize is given to someone for the promotion of Czech literature internationally, which Jagodziński achieved through Polish translations of Czech authors such as Milan Kundera and Bohumil Hrabal. Jagodziński was also the editor of a book of conversations with exiled Czech writers as well as an anthology of forbidden Czech authors.

Jiří Theiner was a Czech-born two-time refugee (from the Nazis in 1938 and the Soviets in 1968) who became editor of the Index on Censorship as well as translating work by Czech writers such as Ivan Klíma, Ludvík Vaculík and Václav Havel.

Of course censorship did not go out with the hammer and sickle. Lingering around the desert castle structure serving as a centerpiece of the Saudi exhibition were a number of Czech journalists surveying visitors’ opinions of Saudi censorship and consequently, of what Saudi books were officially acceptable and on display.

Whatever one can say about the depth and range of Saudi writing (I personally can’t say anything) the country’s Book World presentation did not offer a very optimistic view. The first title presented to viewers approaching the plywood castle was King Abdullah’s Counter Terrorism – Strategy and Philosophy, a book that I must admit is not on my To Read list for this lifetime.

Then again, there is no reason to confine ourselves to this lifetime, for the next book on display was Journey to the World Beyond, a book which appears to be an English-language edition of a work of religious devotion prepared especially for the book fair. This was one of many religious books  to be seen, along with pictures books of plant life in Saudi Arabia, coffee-table history books and other anodyne subjects. The section of academic books might have contained some intellectually stimulating topics, but I can’t say because with the exception of Obstetrics in Farm Animals and another couple titles they were all in Arabic.

There were three shelves devoted to “cultural and literary” subjects, though seeing the King’s counterterrorism book included there (and the Journey) was sent me to look elsewhere for literary nourishment.

On the far side of the castle a similar situation was visible at the Chinese booth, where the fact that almost all the books were in Chinese kept the crowds at bay. Among the translated books (in English only) were The Selected Works of Jiang Zemin and accounts of natural disasters in China.

The fair’s focus on Arab literature is more than the restricted PR offered  by its centerpiece, with a number of panels with Arab writers discussing their work and the issues of censorship. More on that in a coming post. For English speakers though, suffice it to say that the booth shared by a number of publishers including Literature Across Frontiers and the American University in Cairo Press had a fantastic display of Arab writers, including both well-known names like Naguib Mahfouz and authors that have yet to gain a broad international reputation.

Modern literature has a heartbeat

There is some genuine promotion of contemporary writing in Europe going on at the fair as well, and it is not necessarily where you might expect it to be. The French and Polish booths, for example, were both small and low-key. Two of the real standouts were Romania and Slovakia, with large presentations and, particularly in the case of the Romanians, a significant amount of material in English.

The Romanian booth was lined with the novels of writers becoming increasingly well-known in English through recent translations such as Mircea Cărtărescu, Bogdan Suceava and Filip Florian among others. In attendance at the fair is Romanian-speaking Moldovan writer Iulian Ciocan, whose short story Auntie Frosea is included in Best European Fiction 2011.

Slovak writers Pavel Vilikovský and Dušan Šimko, both contributors to Dalkey Archive’s Slovak anthology in 2010 will be presenting recent work, with other notable appearances including Israeli novelist David Grossman, Goncourt prize winner for a first novel in 2010 Laurent Binet and Michael Scammell, founder of Index on Censorship and most recently author of a biography of Arthur Koestler.

And it was Koestler whose oft-repeated quote on censorship, tyranny and the way people adjust to them remains so relevant: “The inner censor of the mind of the true believer completes the work of the public censor; his self-discipline is as tyrannical as the obedience imposed by the regime; he terrorizes his own conscience into submission; he carries his private Iron Curtain inside his skull, to protect his illusions against the intrusion of reality.”